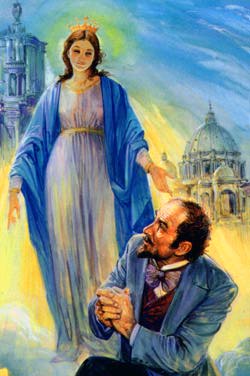 Feast day Our Lady of the Miracle: January 20

Why would Our Lady appear to a man who hated the Faith?

Marie Alphonse Ratisbonne was born at Strasburg France, on 1 May, 1814. He was the son and heir of a wealthy, aristocratic family of Jewish bankers. When Alphonse Ratisbonne was still a child his older brother, Theodor, converted to the Catholic faith and became a priest. The family Ratisbonne reacted with hostility and horror. Alphonse resolved never to communicate again with his older brother, and developed a violent antipathy to the Catholic faith and to all things Catholic. In 1842, 28 years old, he is engaged to his own niece, Flore Ratisbonne, whom he plans to marry the following August. Right now, he is touring Europe and the East, partly for pleasure and partly for his health; one last fling before settling down with Flore and assuming a partnership at his uncle's bank. Ratisbonne decided to go to Naples, to spend the winter in Malta, to strengthen his delicate health. 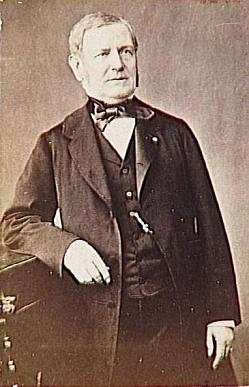 In Naples he had mistaken the road and instead of coming to the reservation office for Palermo, as he intended, he arrived at the stage-coach for Rome. Even after he realized what was up; he remained there and booked his passage on the steamer to Rome. He left Naples on the 5th and arrived in Rome on the 6th, the feast of the Three Kings. So here he is, making the best of it, avidly touring Roman ruins and museums in the company of a paid guide. On January 8, Ratisbonne was called by name on the street. It was his old classmate from Strasburg, Gustavo de Bussières, a Protestant. The two eagerly rekindle their friendship. Later, when Alphonse calls on Gustave, he encounters the latter's older brother, the Baron Theodore de Bussières, a convert to Catholicism and a close friend of Alphonse's priest-brother. Alphonse feels instinctive abhorrence toward this zealous Catholic convert, but he knows the baron is an expert on Constantinople, which Alphonse plans to visit, so he rashly agrees to call upon him for travel advice. De Bussières saw it as his mission to convert any unbeliever who crossed his path in life, to Catholicism. He and Ratisbonne became friends, but Ratisbonne's sarcasm and blasphemy irritated him enormously. 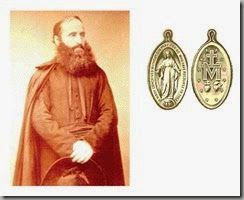 Finally, the baron makes an extraordinary proposition. "Since you abhor superstition and espouse such liberal views," he asks Alphonse, "would you consider submitting to a simple test?" "What test?" "To wear something I'm going to give you. It's a medal of the Holy Virgin. It appears quite ridiculous to you, no doubt. But as for me, I attach great importance to it." And he shows Alphonse the Miraculous Medal attached to a cord. Alphonse is dumbstruck. He can scarcely believe the baron's impertinence. But as a man of the world, he doesn't want to seem to be making too much of a trifle. So he consents, breezily quoting a line from The Tales of Hoffman: "If it does me no good, at least it will do me no harm." The baron's little daughter puts the miraculous medal around Alphonse's neck. And Alphonse burst out laughing: "Here am I, a Roman, apostolic Catholic!" But this was not enough for De Bussières. "And now", he said, "you must complete the test. Every morning and evening recite the Memorare, a short and efficious prayer, which St. Bernard composed to the Virgin Mary". Ratisbonne said: "Let it be! I promise to recite this prayer. If it will not do me any good, it will not do me any bad!"

In fact, the baron's relentless proselytism is starting to get on Alphonse's nerves. Far from drawing him toward Catholicism, it is repelling him further. Yet the baron, undaunted, persists. But the baron is not relying on argument alone. He's also praying very hard. And so are his friends, his fellow members of Rome's tight-knit community of aristocratic French expatriates. Notable among these friends is the Count Laferronays, ex-diplomat, once a notorious roue' and now a devout, fervent Catholic. Moved by the baron's pleas, the Comte drops into a church and fervently prays "more than 20 Memorares" for the conversion of the "young Jew." That very same evening, the Count suffers a fatal heart attack. After receiving his final Sacraments, he dies devoutly, surrounded by his loving family.

At midday, January 20, 1842, when the Baron was arranging the funeral of his friend Count Laferronays in the basilica of St. Andrea delle Fratte in Rome he asked Ratisbonne to wait for him in the church. When the Baron came back to the church he found Ratisbonne on his knees in prayer. This sight moved him to tears. In Ratisbonne's own words: "I was scarcely in the church when a total confusion came over me. When I looked up, it seemed to me that the entire church had been swallowed up in shadow, except one chapel. It was as though all the light was concentrated in that single place. I looked over towards this chapel whence so much light shone, and above the altar was a living figure, tall, majestic, beautiful and full of mercy. It was the most holy Virgin Mary, resembling her figure on the Miraculous Medal. At this sight I fell on my knees right where I stood. Unable to look up because of the blinding light, I fixed my glance on her hands, and in them I could read the expression of mercy and pardon. In the presence of the Most Blessed Virgin, even though she did not speak a word to me, I understood the frightful situation I was in, my sins and the beauty of the Catholic Faith. 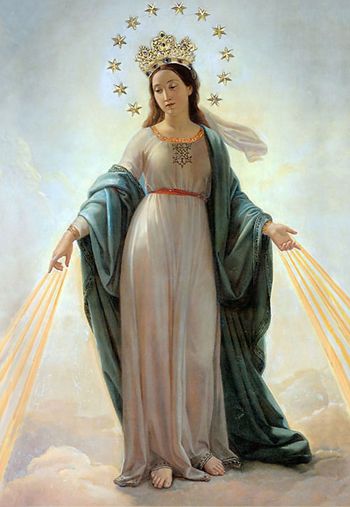 The baron helps Ratisbonne outside and into his carriage. He takes him to the Hotel Serny, where Alphonse is staying, and loosens his cravat so he can breathe. But Alphonse is still sobbing, clasping his Miraculous Medal, murmuring thanks to God. At last he turns to the baron, embraces him, and with a face "presque transfiguree" says: "Take me to a confessor! When can I receive baptism, without which I can no longer live?" "What has happened?" exclaims the baron. "What have you seen?" "That," says Alphonse, "I can reveal only on my knees and to a priest." So...the baron takes him to the Gesu, the Jesuit mother-church, to see Father Villefort. There, Alphonse tries to explain himself, but he is still sobbing so hard that he is unintelligible. At last he calms down, takes the Miraculous Medal from his neck, holds it up, and cries: "I saw Her! I saw Her!"

Alphonse Ratisbonne confessed and thought that his family would believe he was insane and would have ridiculed him. So he prefered to flee totally from the world, its chatter and its judgments. He entered the convent of the Jesuits to make a retreat under the guide of Father Villefort. January 31, 1842, he received from the hands of His Eminence Cardinal Patrizi, the Vicar of His Holiness, baptism, confirmation and his first Holy Communion. The following month, the Vatican holds a canonical process to investigate the circumstances surrounding Alphonse's conversion. After lengthy investigation and many depositions, it concludes that his sudden conversion was entirely miraculous; an act of God wrought through the powerful intercession of the Virgin. In May 1842, only a few months after the apparition, a painting of the Madonna of the Miracle was placed for veneration in exactly the same spot and in the same form as She appeared. The canvas was painted by the artist Natale Carta, who according to tradition, followed the indications of Ratisbonne himself. In the same year, after a formal inquest about the apparition of January 20, the Vicar General of Pope Gregory XVI, Cardinal Patrizi, declared on June 3, 1842, that it was a divine miracle operated through the intercession of the Blessed Virgin Mary, and permitted the publication and spread of texts recording the miracle.

After his conversion he assisted his brother, Theodor, in founding the Sisterhood of Our Lady of Sion in 1843, was ordained priest in 1847, and entered the Society of Jesus. Desirous, however, to devote himself entirely to the conversion of the Jews, he left the society with the consent of Pope Pius IX, transplanted the Sisters of Sion to Jerusalem in 1855, and built for them in 1856 the large Convent of Ecce Homo with a school and an orphanage for girls. In 1860 he erected the Convent of St. John on the mountain at Ain Karim, together with a church and another orphanage for girls. Here Alphonse laboured with a few companions (Pères de Sion) for the conversion of Jews and Mohammedans until his death. He died there May 6, 1884. Ratisbonne did try to get in contact with Catherine Labouré, but never succeeded, as the Sister was shielded from the outside world. There were so many miracles operated by Mary in the Shrine, that on January 17, 1892, Pope Leo XIII coronated the venerated icon with a diadem. On April 25, 1942, Pope Pius XII elevated the title of the church to the rank of a basilica. On March 12, 1960, Pope John XXIII elevated the basilica of Sant Andrea delle Fratte to the title of a cardinal's church. The visit of Pope John Paul II to this church took place on February 28, 1982.

"This apparition to Alphonse Ratisbonne in Rome is fully approved by the Holy See: June 3, 1842" 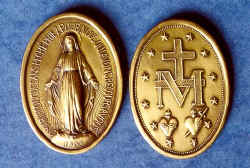 Please click here for the miraculous healing of my nephew Robbie 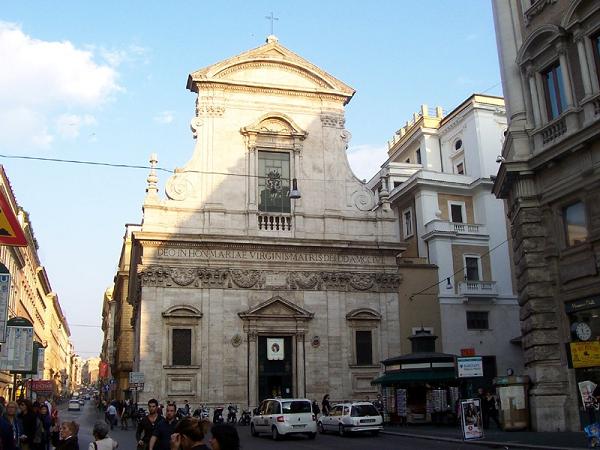 Four years later, in 1846 The Holy Virgin appeared once more.
This time in La Salette