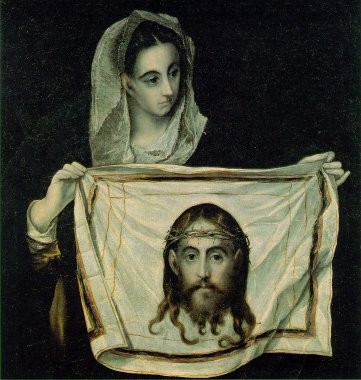 In several regions of Christendom there is honored under this name a pious matron of Jerusalem who, during the Passion of Christ, as one of the holy women who accompanied Him to Calvary, offered Him a towel. Jesus accepted the offering and after using it handed it back to her, creating the image of His face miraculously impressed upon it. The name "Veronica" itself comes from the Latin Vero Icone, or true image of Jesus Christ.

Unfortunately, there is no historical evidence or scriptural reference to this event, but the legend of Veronica became one of the most popular in Christian lore and the veil one of the beloved relics in the Church. Current tradition among many pious Catholics has it that Veronica was able to heal Tiberius of a grievous sickness with her napkin, and that the emperor, thus convinced of the divinity of Christ, forthwith sent Pilate into exile.

When she died, she left the cloth to Pope Saint Clement. A 'veil of Veronica' is preserved at Saint Peter's in Rome, probably from the 8th century. St. Veronica is commemorated on Shrove Tuesday, but her festival is not of obligation. The popular modern name for this relic, which is venerated at the Sudarium of Oviedo among other shrines, is "Veronica's Veil".

Patroness: of the Holy Face of Jesus 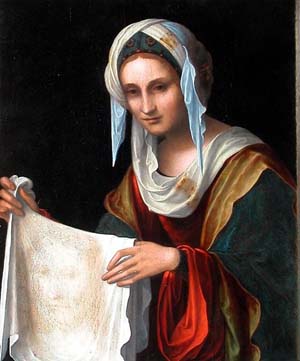 O My Jesus, Saint Veronica served You on the way to Calvary by wiping Your beloved face with a towel on which Your sacred image then appeared. She protected this treasure, and whenever people touched it, they were miraculously healed. I ask her to pray for the growth of my ability to see Your sacred image in others, to recognize their hurts, to stop and join them on their difficult journeys, and to feel the same compassion for them as she did for You. Show me how to wipe their faces, serve their needs, and heal their wounds, reminding me that as I do this for them, I also do this for You. Saint Veronica, pray for me.
Amen.