The Black Madonna of Rocamadour 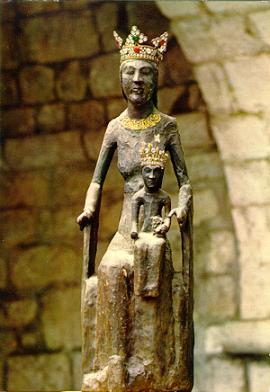 Rocamadour owes its origin to St Amadour, who, according to tradition, chose the place as a hermitage for his devotions to the Virgin Mary. This famous place of pilgrimage, is most strikingly situated. Its buildings rise in stages up the side of a cliff on the right bank of the Alzou (Dordogne - France), which here runs between rocky walls 400 ft. in height. Flights of steps ascend from the lower town to the churchesa group of massive buildings half-way up the cliff. The chief of them is the church of NotreDame (1479), containing the wooden figure of the Madonna reputed to have been carved by St Amadour.

Rocamadour (250 km east from Bordeaux) became as important pilgrimage place in the Christian West as Santiago de Compostella, thanks to the progress of the Marian cult and thanks to the discovery, in 1166, of the body of St. Amadour. Tradition records that he was a servant in the house of the Holy Family. St. Amadour, who was none other than Zacheus of the Gospel, husband of St. Veronica, who wiped the Saviour's face on the way to Calvary. Driven forth from Palestine by persecution, Amadour and Veronica embarked in a frail skiff and, guided by an angel, landed on the coast of Aquitaine, where thy met Bishop St. Martial, another disciple of Christ who was preaching the Gospel in the south-west of Gaul. After journeying to Rome, where he witnessed the martydoms of Sts. Peter and Paul. Amadour, having returned to France, on the death of his spouse, withdrew to a wild spot in Quercy where he built a chapel in honour of the Blessed Virgin, near which he died a little later. The shrine, called Rocamadour, sanctuary of the Blessed Virgin, has attracted pilgrims for centuries from every country, among them kings, bishops, and nobles. 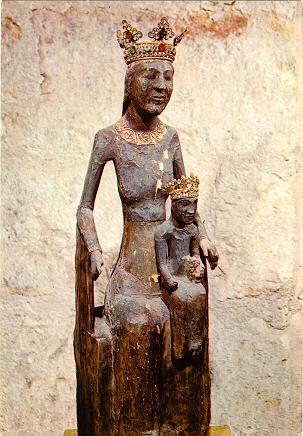 Reports of miracles happening at the site spread rapidly. King Henry Plantagenet was one of the first pilgrims to come to Rocamadour to find a miraculous cure. St. Louis IX of France followed in the next century, and Rocamadour became as important as Mont St. Michel as a pilgrimage destination. Few people know that Rocamadour has thus become the second most visited site in France – after Mont St. Michel’s 12th century monastery.

Today’s visitors is advised to avoid the traditional activity of climbing up the 216 stone steps on one’s knees, but instead to sign up for a guided walking tour on one’s feet. This fascinating tour will take you to four of the seven medieval chapels built into the rock, one of which contains the mysterious Black Madonna, venerated for over a thousand years. You’ll hear wonderful legends of how the body of St. Amadour was miraculously preserved for 1.100 years; how the ancient bell rings itself when a miracle occurs at sea; how the sword in the rock you see in front of you is really the famous sword of Roland. . . . Near the tomb of St. Amadour is the Church of the Black Madonna and the Mircaulous Bell.

"To all those interested in visiting Rocamadour, please have a look at the photo below. A natural colouring within the rock appears to portray an image of the Virgin Mary cradling baby Jesus. It is delineated below within the red border and only visible from lower down, below the main town. God bless this beautiful and holy site." 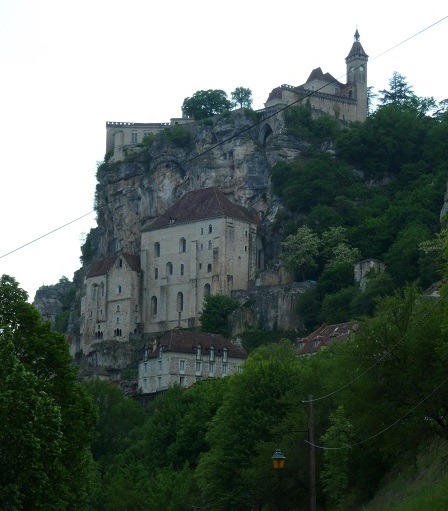