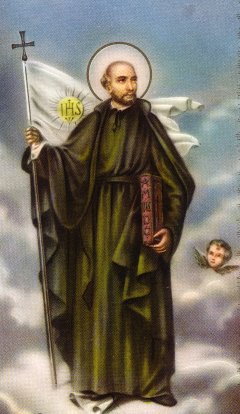 Inigo de Loyola was born December 24, 1491 in Azpeitia in the Basque province of Guipuzcoa in northern Spain as the son of Don Beltrán Yañez de Oñez y Loyola and Marina Saenz de Lieona y Balda. He was the youngest of thirteen children.

Since he would inherit nothing of the family fortune, he was hired out to the court of Navarre to serve the king as a soldier and courtier. Hence he was trained in the art of war and in courtly chivalry. Loyola was promptly hit in the leg by a cannon ball, the town surrendered anyway, and the French sent him home on a stretcher. His leg was set but did not heal, so it was necessary to break it again and reset it, all without anesthesia. All these pains were undergone voluntarily, without uttering a cry or submitting to be bound. Although he was told to prepare for death, he took an unexpected turn for the better. The leg healed, but he was left with one leg shorter than the other. For the rest of his life he walked with a limp.

Meanwhile, he was bedridden for many months, and spent the time reading. Loyola asked for tales of knightly adventure, but instead was given a Life of Christ, written by a Carthusian monk. He read it, and his life was transformed. He went on pilgrimage to te Virgin of Montserrat, where he hung up his sword before the altar. Then he went and spent several months in a cave near the town of Manresa, Catalonia and lived and prayed in great austerity for ten months, after which he undertook a pilgrimage to Jerusalem. After his return to Spain in 1524, Loyola spent ten years getting an education at Barcelona, Alcalá, Salamanca, and Paris, beginning by going to elementary school to learn Latin grammar, and ending with a Master of Arts degree from the University of Paris, receiving his degree on 14 March 1534.

By 1534 he had six key companions, Peter Faber (French), Francis Xavier (from Navarra, Spain), Alfonso Salmeron, Jacob Laines, and Nicholas Bobadilla (Spaniard), and Simon Rodrigues (a Portuguese). On August 15, 1534, he and the other six in St. Mary's Church, Montmartre founded the Society of Jesus. In 1539 they presented their plans for the order to Pope Paul III, and the order was approved the following year. Ignatius was appointed the first superior-general until his death, by which time it had branches in Italy, Spain, Germany, France, Portugal, India, and Brazil. Loyola described his mystical vision of prayer in "The Spiritual Exercises". In his last years he laid the foundations of a system of Jesuit schools.

He never used the term Jesuit, which was coined as an insult by his opponents; the Society today uses the term with pride. He travelled Europe and the Holy Lands, then settled in Rome to direct the Jesuits. His health suffered in later years, and he was nearly blind at death. He died suddenly of fecer on 31 July 1556 at Rome, Italy.

Loyola was beatified on 27 July 1609 by Pope Paul V and canonized on 12 March 1622 by Pope Gregory XV. The Jesuits today have over 500 universities and colleges, 30,000 members, and teach over 200,000 students each year. The Society of Jesus is consecrated under the patronage of Madonna Della Strada, a title of the Blessed Virgin Mary, and is led by a Superior General.

Patron of: spiritual exercises and retreats. 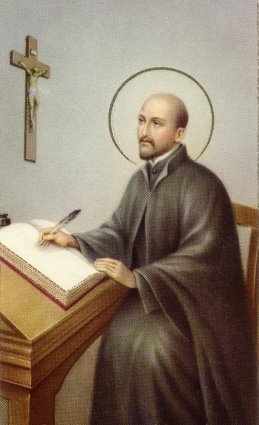 Teach us, Good Lord,
To Serve Thee as Thou deservest;
To give and not to count the cost;
To fight and not to heed the wounds;
To labor and not to ask for any reward,
save that of knowing that we do Thy will.
Through Jesus Christ Our Lord.
Amen.

Anima Christi - Soul of Christ
of St. Ignatius of Loyola

Soul of Christ, make me holy.
Body of Christ, save me.
Blood of Christ, fill me with love.
Water from Christ's side, wash me.
Passion of Christ, strengthen me.
Good Jesus, hear me.
Within your wounds, hide me.
Never let me be parted from you.
From the evil enemy, protect me.
At the hour of my death, call me.
And tell me to come to you.
That with your saints I may praise you.
Through all eternity.
Amen.