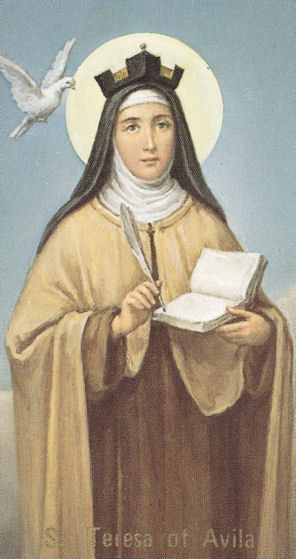 Teresa of Avila was born as Teresa Ali Fatim Corella Sanchez de Capeda y Ahumada in Avila, Spain, on March 28, 1515. She was a daughter of Don Alonso Sanchez de Cepeda, a son of a Toledan merchant, and Doña Beatriz Davila y Ahumada, originally from Tordesillas. There were nine children of this marriage, of whom Teresa was the third, and three children of her father's first marriage. Teresa was only twelve when her mother died, leaving behind 10 children. She wrote later of her sorrow in these words: "As soon as I began to understand how great a loss I had sustained by losing her, I was very much afflicted; and so I went before an image of our Blessed Lady and besought her with many tears that she would vouchsafe to be my mother." After the death of her mother and the marriage of her eldest sister, Teresa was sent in 1531 for her education to the Augustinian nuns at Avila. An uncle acquainted her with the Letters of Saint Jerome, which led her to pursue religious life. At the age of 20 Teresa joined the Carmelite Convent of the Incarnation at Avila.

Then Teresa fell ill with malaria. When she had a seizure, people were so sure she was dead that after she woke up four days later she learned they had dug a grave for her. Afterwards she was paralyzed for three years and was never completely well. Yet instead of helping her spiritually, her sickness became an excuse to stop her prayer completely: she couldn't be alone enough, she wasn't healthy enough, and so forth. Later she would say: "Prayer is an act of love, words are not needed. Even if sickness distracts from thoughts, all that is needed is the will to love." However, her prayer life eventually deepened, she began to have visions and a vivid sense of the presence of God, and was converted to a life of extreme devotion.

Inspired by a niece, who was also a Carmelite at Avila, she decided to undertake the establishment of a reformed convent that would be restored to the austerity and devotion of earlier times. This effort met strong opposition from several quarters. In 1562, Teresa received approval for a new foundation, the Discalced Carmelite Nuns of the Primitive Rule of Saint Joseph, at Avila, which she began with with her niece and three other nuns. Several years later, while she was establishing a new convent in Toledo, she met St. John of the Cross, a priest of the Carmelite Order of men, and soon after made new foundations for men that were eventually placed under his care. Difficulties and opposition to the newly established reformed Discalced Carmelite foundations persisted. "Discalced", literally "shoeless", refers to the austerity of the new foundations. The nuns and friars wore sandals instead of shoes. 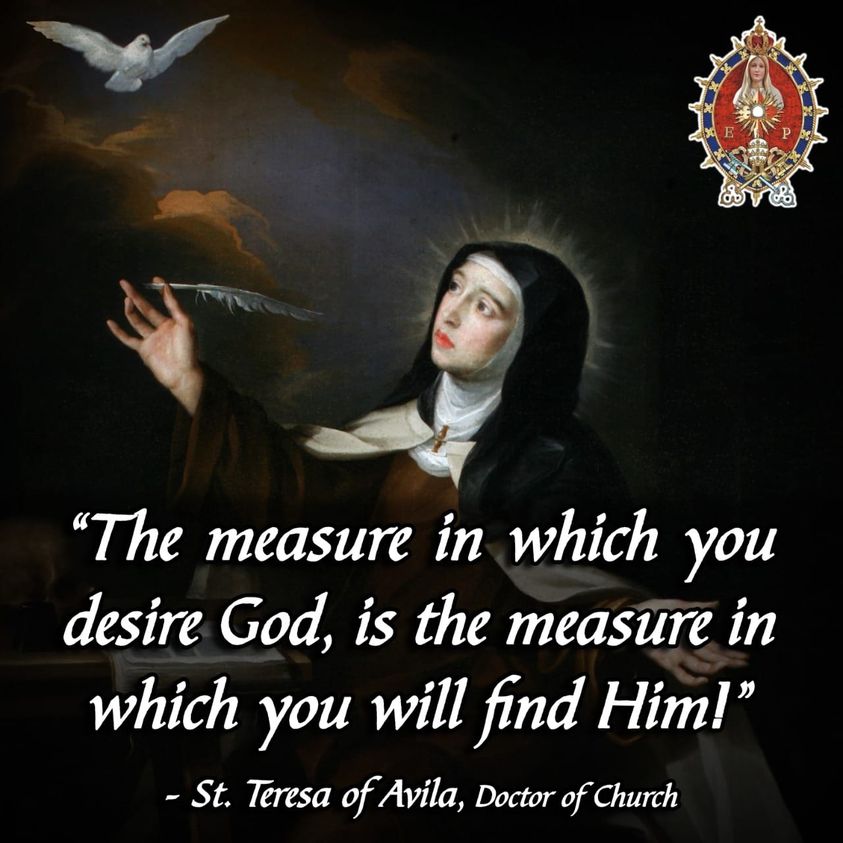 Beginning in 1567, and for the remaining 15 years of her life, the now 52 year old Teresa of Jesus embarked on strenuous journeys, on mules and in primitive ox-carts, all over Spain, to found and constantly visit 17 new convents of nuns who followed her reform vision of the Carmelite life, alongside 15 new monasteries of the men's order. Her life of contemplative prayer and the pursuit of Christian perfection never flagged during those years. Despite a constant threatening watch over her and her work by the Inquisition, she wrote several more books on prayer and accounts of her life and the foundation of her convents. Among the writings of St. Teresa, three can be indicated as the depositories of her spiritual teaching: her autobiography, the Way of Perfection, and the Interior Castle. Readers must exercise some caution, however, and resist the temptation to hastily synthesize the doctrine in these books, because St. Teresa wrote from her personal experience at different stages of the spiritual life.

The kernel of Theresa's mystical thought throughout all her writings is the ascent of the soul in four stages:

Teresa died October 4, 1582 at the age of 67 at Alba de Tormes in the arms of her secretary and close friend Blessed Anne of Saint Bartholomew. Teresa died in 1582. Her body was exhumed several times after her death, and each time found sweet-smelling, firm, and incorrupt. Her heart, hands, right foot, right arm, left eye and part of her jaw are on display in various sites around the world. She was beatified 24 April 1614 by Pope Paul V and in 1617 the Spanish parliament proclaimed her the Patroness of Spain. Teresa was canonized a Saint 12 March 1622 by Pope Gregory XV. It never occurred to anyone to declare any woman Saint a Doctor until, on September 27, 1970, Pope Paul VI added both Saint Teresa of Avila and Saint Catherine of Siena to the roster of Doctors of the Church. In 1997, Pope John Paul II named Theresa of Lisieux the third woman Doctor of the Church.

Symbol: Her symbol is a heart, an arrow, and a book.

Women Saints: Doctors of the Church:

Father,
by your Spirit you raised up St. Teresa of Jesus
to show your Church the way of perfection.
May her inspired teaching awaken in us a longing for true holiness.
We ask this through Christ our Lord.
Amen.

Prayer to Saint Teresa of Avila 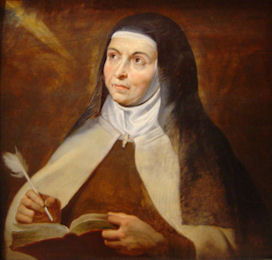 Dear wonderful Saint,
model of fidelity to vows,
you gladly carried a heavy cross
following in the steps of Christ
who chose to be crucified for us.
You realized that God, like a merciful Father,
chastises those whom He loves,
which to worldlings seems silly indeed.
Grant to {name of sufferer} relief from grant pains,
if this is in line with God's plans.
Amen.