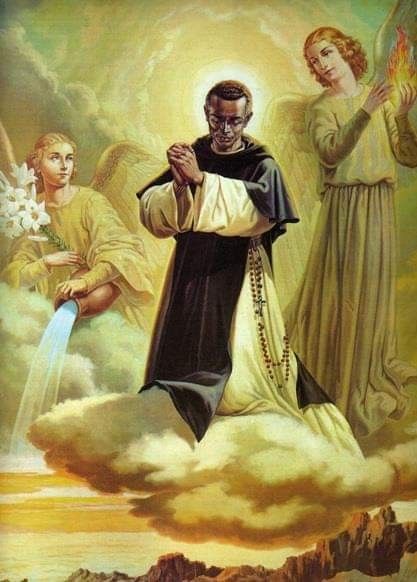 Martin was the illegitimate son to a Spanish gentlemen and a freed slave from Panama, of African or possibly Native American descent. At a young age, Martin's father abandoned him, his mother and his younger sister, leaving Martin to grow up in deep poverty. After spending just two years in primary school, Martin was placed with a barber/surgeon where he would learn to cut hair and the medical arts.

He was noted for his work on behalf of the poor, establishing an orphanage and a children's hospital. He maintained an austere lifestyle, which included fasting and abstaining from meat. Among the many miracles attributed to him were those of levitation, bilocation, miraculous knowledge, instantaneous cures, and an ability to communicate with animals.

He had a sister named Juana, born two years later in 1581. After the birth of his sister, the father abandoned the family. Ana Velázquez supported her children by taking in laundry. He grew up in poverty and, when his mother could not support him, Martin was confided to a primary school for two years, and then placed with a barber/surgeon to learn the medical arts. He spent hours of the night in prayer, a practice which increased as he grew older.

Under Peruvian law, descendants of Africans and Native Americans were barred from becoming full members of religious orders. The only route open to Martin was to ask the Dominicans of Holy Rosary Priory in Lima to accept him as a donado, a volunteer who performed menial tasks in the monastery in return for the privilege of wearing the habit and living with the religious community. At the age of 15 he asked for admission to the Dominican Convent of the Rosary in Lima and was received first as a servant boy, and as his duties grew he was promoted to almoner.

Martin continued to practice his old trades of barbering and healing and was said to have performed many miraculous cures. He also took on kitchen work, laundry, and cleaning. After eight years at Holy Rosary, the prior Juan de Lorenzana, decided to turn a blind eye to the law and permit Martin to take his vows as a member of the Third Order of Saint Dominic. Holy Rosary was home to 300 men, not all of whom accepted the decision of De Lorenzana: one of the novices called Martin a "mulatto dog", while one of the priests mocked him for being illegitimate and descended from slaves.

When Martin was 24, he was allowed to profess religious vows as a Dominican lay brother in 1603. He is said to have several times refused this elevation in status, which may have come about due to his father's intervention, and he never became a priest. It is said that when his convent was in debt, he implored them: "I am only a poor mulatto, sell me." Martin was deeply attached to the Blessed Sacrament, and he was praying in front of it one night when the step of the altar he was kneeling on caught fire. Throughout all the confusion and chaos that followed, he remained where he was, unaware of what was happening around him.

When Martin was 34, after he had been given the religious habit of a lay brother, he was assigned to the infirmary, where he was placed in charge and would remain in service until his death at the age of 59. He was known for his care of the sick. His superiors saw in him the virtues necessary to exercise unfailing patience in this difficult role. It was not long before miracles were attributed to him. Martin also cared for the sick outside his convent, often bringing them healing with only a simple glass of water. He ministered without distinction to Spanish nobles and to slaves recently brought from Africa. One day an aged beggar, covered with ulcers and almost naked, stretched out his hand, and Martin took him to his own bed. One of his brethren reproved him. Martin replied: "Compassion, my dear Brother, is preferable to cleanliness."

When an epidemic struck Lima, there were in this single Convent of the Rosary 60 friars who were sick, many of them novices in a distant and locked section of the convent, separated from the professed. Martin is said to have passed through the locked doors to care for them, a phenomenon which was reported in the residence more than once. The professed, too, saw him suddenly beside them without the doors having been opened. Martin continued to transport the sick to the convent until the provincial superior, alarmed by the contagion threatening the friars, forbade him to continue to do so. His sister, who lived in the country, offered her house to lodge those whom the residence of the religious could not hold. One day he found on the street a poor Indian, bleeding to death from a dagger wound, and took him to his own room until he could transport him to his sister's hospice. The prior, when he heard of this, reprimanded him for disobedience. He was extremely edified, however, by his reply: "Forgive my error, and please instruct me, for I did not know that the precept of obedience took precedence over that of charity." The prior gave him liberty thereafter to follow his inspirations in the exercise of mercy.

Martin did not eat meat. He begged for alms to procure necessities the convent could not provide. In normal times, Martin succeeded with his alms to feed 160 poor persons every day, and distributed a remarkable sum of money every week to the indigent. Side by side with his daily work in the kitchen, laundry and infirmary, Martin's life is said to have reflected extraordinary gifts: ecstasies that lifted him into the air, light filling the room where he prayed, bilocation, miraculous knowledge, instantaneous cures and a remarkable rapport with animals.He founded a residence for orphans and abandoned children in the city of Lima. 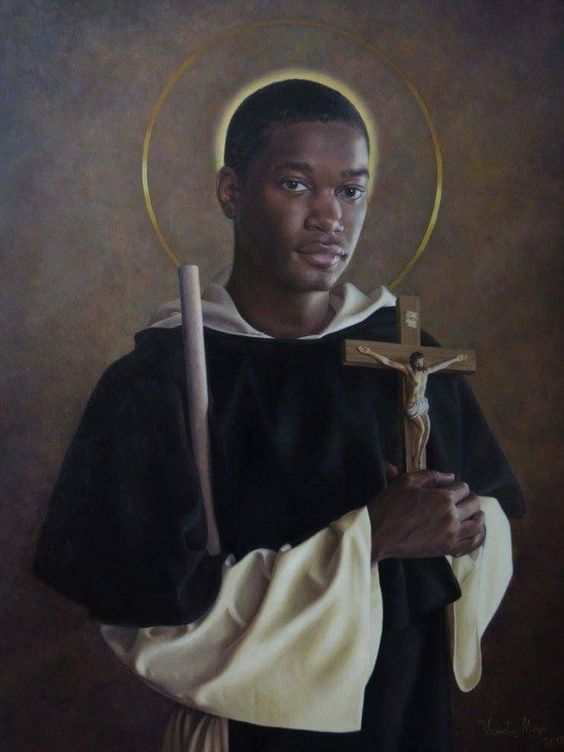 Martin was a friend of both St. Juan Macías, a fellow Dominican lay brother, and St. Rose of Lima, a lay Dominican. By the time he died, on November 3, 1639, he had won the affection and respect of many of his fellow Dominicans as well as a host of people outside the priory. Word of his miracles had made him known as a saint throughout the region. As his body was displayed to allow the people of the city to pay their respects, each person snipped a tiny piece of his habit to keep as a relic. It is said that three habits were taken from the body. His body was then interred in the grounds of the monastery.

After De Porres died, the miracles and graces received when he was invoked multiplied in such profusion that his body was exhumed after 25 years and said to be found intact, and exhaling a fine fragrance. Letters to Rome pleaded for his beatification; the decree affirming the heroism of his virtues was issued in 1763 by Pope Clement XIII.

Pope Gregory XVI beatified Martin de Porres on October 29, 1837, and nearly 125 years later, Pope John XXIII canonized him in Rome on May 6, 1962. He is the patron saint of people of mixed race, and of innkeepers, barbers, public health workers and more, with a feast day on November 3.

Martin is also commemorated in the Calendar of Saints of the Church of England on November 3.

He is recognised as Papa Candelo in the Afro-Caribbean-Catholic syncretist religion, which is practised in places where African diaspora culture thrives such as Puerto Rico, the Dominican Republic, Cuba, the United States, and his native Peru.