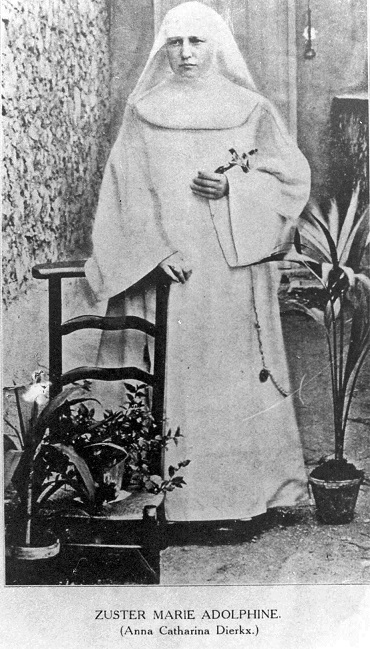 Marie Adolphine Dierkx was born on March 8, 1866 in the Brabant village of Ossendrecht (municipality of Woensdrecht). At the age of five she loses her mother and is raised by relatives. She went to school with the sisters of Oudenbosch and at the age of twelve became a nanny with the De Beukelaar family. When she was of age, she went to work in the only factory in the village, a coffee roaster. There she packed the roasted coffee. But she didn't stay there. When she is eighteen, the dream of every girl from the South-West corner of Brabant comes true: she can work as a maid in Antwerp. There she gets a job with the Coveliers family through the mediation of the aforementioned De Beukelaar family.

There she also came into contact with the Franciscan Missionaries of Mary, the congregation where she would start her missionary career as a novice on March 19, 1893. It is a still young congregation, founded in 1877 by the French Countess Hélène de Chappotin de Neuville, known as the religious Mary of the Passion. The sisters devoted themselves to prayer five hours a day, focusing on the Adoration of the Most Holy. They also work in the mission. When the sisters ask her why she is entering, Kaatje replies: "The desire to be allowed to suffer for Our Lord." She chooses the name Marie Adolphine, although she herself had a preference for the name of the Dutch saint Lidwina. After her first (1895) and solemn (1898) vows, she remained in the Antwerp monastery. She works in the kitchen and is in charge of the laundry. But she knew she would not see the spire of Our Lady Cathedral forever and ever, because her order was not a missionary for nothing.

When the Congregation accepted the request of the Auxiliary Bishop of Tai-yuan-foe in China in late 1898 to establish a new monastery there with the aim of caring for 200 orphans and establishing a hospital, Sister Marie Adolphine was one of eight sisters designated for this purpose. Besides her mental attitude and her character traits, a practical skill such as baking bread also made her eligible for this, as the only one in the Antwerp monastery. Marie Adolphine was very pleased with this election. Her fellow sisters, however, pointed out to Marie Adolphine the danger of being killed in what was then a turbulent China by the so-called 'Boxers'. In their aversion to Western political and religious influences in their country, the latter found themselves supported by the elderly, anti-imperialist Empress Dowager Tse-tsi, who had come to power in 1898. When Marie Adolphine heard that she was going to China, some missionaries and missionaries had already been murdered by the 'Boxers'. However, she was not deterred from what she saw as her mission.

Ultimately, seven sisters would venture into the adventure, including Marie Adolphine. On May 4, 1899, the group arrived at the mission post and orphanage of the Bishop of Tay JuenFu, in the province of Chansi. Marie Adolphine is also appointed because of one of her practical skills: she can bake bread. The situation in China at that time was explosive. Floods, crop failures and mismanagement made the situation of the farming population miserable. And anti-Western circles within the Chinese elite took advantage of that. They channeled the discontent and directed it at the foreigners and their so-called "henchmen", the Chinese Christians.

After Marie Adolphine had worked in Chansi for a year and a half, the fire broke out. Chinese rebels, united in the secret society of the White Lotus, began looting and killing. They violated every foreigner and Chinese Christian they could get their hands on. The Westerners called them Boxers because the cult members meditated through boxing movements, which were also preparing for possible fights. Seven sisters, two bishops, two fathers, and a brother were killed on July 9, 1900, after being gathered together for a sham - which was supposed to resemble a court session - with many taunts and insults. Eyewitnesses later reported that the sisters were martyred by decapitation while they were singing, after first watching the men be beaten and beheaded. A total of 250 foreigners, mostly religious, lost their lives in those months. Less well known is that as many as 18,000 Chinese Christians have been murdered. The homes of thousands of others were destroyed.

Marie Adolphine was beatified by Pope Pius XII on November 24, 1946, along with 28 other victims of the violent Boxer Rebellion in China in 1900. Pope John Paul II canonized 120 martyrs, including Marie Adolphine, on October 1, 2000. The new saints, 87 Chinese and 33 missionaries, were murdered in China between 1648 and 1930 because they had remained true to their Christian faith.

The M. Adolphine foundation was established in Ossendrecht. Its purpose was to stimulate the worship of Marie Adolphine. This foundation bought Kaatje's birth house in 1951 and converted it into a memorial chapel. This was replaced by a new chapel in 1983. Twice a week a Eucharistic celebration takes place in Kaatje's birth house. As every year on the Sunday after her death on July 9, a prayer tour from the birth house chapel through the house of Kaatje's foster parents to the Berghoeve, where the chairman of the Marie-Adolphine Foundation will give a sermon on the mount. Then the procession proceeds to the Eikelhof, the former property of the Coveliers family. A Holy Mass is celebrated there in good weather. 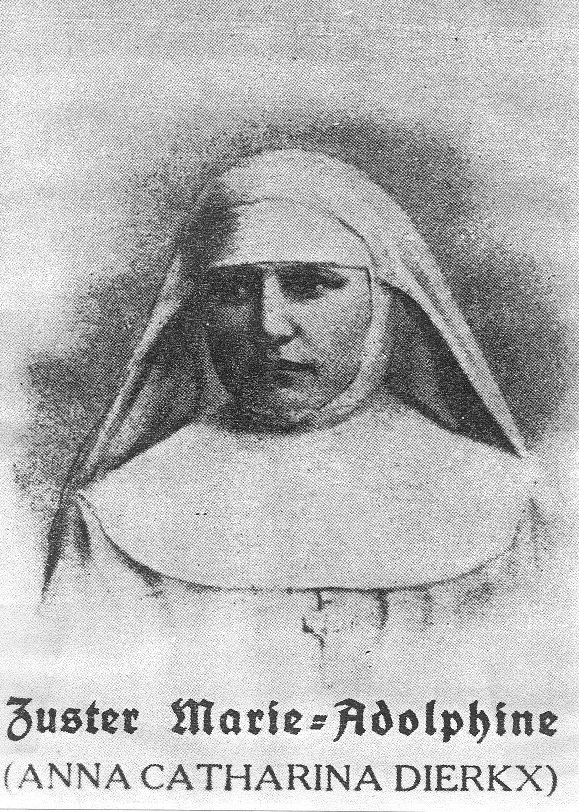