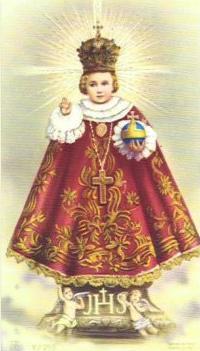 The devotion to the Holy Child Jesus has long been a tradition of the Catholic Church for a very long time. It starts at Bethlehem, and later, with the crib of Christmas of St. Francis of Assisi. This devotion is a veneration of our Lord's sacred Infancy. Many saints had a very strong devotion to the Divine Child, notably St. Therese of the Child Jesus, St. Francis of Assisi, St. Anthony of Padua, and St. Teresa of Avila.

In 1556, Maria Manriquez de Lara brought a precious family heirloom, a statue of the child Jesus, with her to Bohemia (now Czech Republic), when she married the Czech nobleman Vratislav of Pernstyn. The image was made by an old Spanish monk, who received a vision from the Christ Child. The statue of the child is eighteen inches tall, carved of wood, and thinly coated with wax. The left foot is barely visible under a long white tunic. The statue stands on a broad pedestal, and there is a waist-high silver case which holds it upright. The left hand holds a miniature globe surmounted by a cross, signifying the worldwide kingship of Christ. The right hand is extended in blessing in a form usually used by the Supreme Pontiff; the first two fingers are upraised to symbolize the two natures in Christ, while the folded thumb and last two fingers touch each other to represent the mystery of the Holy Trinity.

In 1628, Lady Polyxena presented the statue to the Carmelites at the Church of the Virgin Mary the Victorious. This statue became known as the Infant Jesus of Prague. The Royal Infant of Prague made so many miracles that his devotion spread like fire to the whole world. Shortly after 1628, the Saxons and the Swedes took turns to invade Prague and the Carmelites had to flee and the veneration of the Holy Infant ceased. It was not until 1638 that a young priest named Fr. P. Cyril, a Matre Dei, returned to Prague and found the Holy Infant statue buried in the ruins of the Lady of Victory church. Fr. Cyril cleaned the statue and placed it in the oratory for worship. While he was praying before the Infant Jesus, he heard the Infant Jesus say: "Have pity on Me and I will have pity on you. Give Me My hands and I will give you peace. The more you honor Me, the more I will bless you". 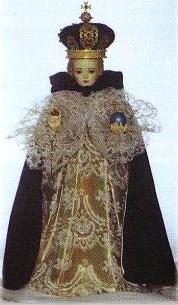 Repairing the statue's hand was a miracle as Father Cyril and his peers had neither the skills to do it themselves, not the funds to hire it done. Father Cyril asked that Our Lady to provide funds. The Divine Infant spoke again, saying Place Me near the entrance of the sacristy and you will receive aid. Cyril did as he was told, and a few days later the statue was fixed by a man who came by the sacristy. With the statue repaired, miracles began to be reported, resulting in an increased veneration of the Holy Child. An altar was built for the image in 1641, and the gold and bejewelled crown on the statue was presen-ted by Bernard Ignatius on 14 January 1651. In 1644 a chapel was built, but was not completed until 1654. Many nobles of the time had greatly supported the Infant Jesus, among them were Lady Polyxena, King Ferdinard (Czech), King Charles Gustav(Sweden), and Bernard Ignatius of the Lords of Martinic. It is interesting to note that the crown over the Divine Infant's head came from Bernard Ignatius, who presented the Infant statue with a little gold crown set with precious stones and jewels on January 14, 1651 during a procession that carried the Infant Jesus statue from the Lady of Victory church to other Prague churches. The Infant Jesus was solemnly coronated on April 4, 1655 by the Archbishop Josef Corta acting for Cardinal Harrach III who was sick.

In 1741, the statue was moved to its final magnificent shrine on the Epistle Side off the church of Our Lady of Victory. It became one of the most famous, and popular shrines in the world. In 1739 the Carmelites of the Austrian Province made the spread of the devotion a part of their apostolate. The popularity of the little King of Prague spread to other countries in the eighteenth century. Pope Leo XIII confirmed the Sodality of the Infant of Prague in 1896 and granted many indulgences to the devotion. Pope St. Pius X unified an organizing membership into a confraternity under the guidance of the Carmelites which increased the spread of the devotion in our own century. Through prayer we humbly ask the Holy Infant to wean us of our need to control our family, friends and own personal lives as He teaches us to surrender all things to His will. With trust and faith in His words: "Ask and you shall Receive, Knock and the door shall Open", we actively place our needs in His little hands in the hope that He will continue to show us what it means to be more like Him.

Prayer to the Infant Jesus of Prague 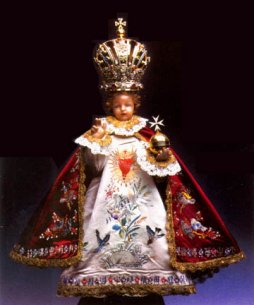 O Infant Jesus,
I form the belief that I shall be granted forgiveness
of sins and place it into the hands of Your most Holy Mother Mary; I commend myself to all and every Holy Mass that is celebrated this day and all over the globe, and I offer all this on behalf of the poor souls of purgatory.
Amen

Prayer of Thanksgiving for Graces Received from the Infant Jesus

I prostrate myself before Thy holy image, O most gracious Infant Jesus, to offer my most fervent thanks for the blessings Thou hast bestowed on me. I shall incessantly praise Thy ineffable mercy and confess that Thou alone are my God, my helper, and my protector. Henceforth my entire confidence shall be placed in Thee! Everywhere I will proclaim aloud Thy mercy and generosity, so that Thy great love&nbsp; and the great deeds which Thou perform through this&nbsp; miraculous image may be acknowledged by all. May&nbsp; devotion to Thy holy infancy increase more and more&nbsp; in the hearts of all Christians, and may all who experience Thy assistance persevere with me in&nbsp; showing unceasing gratitude to Thy most holy infancy, to which be praise and glory forever.&nbsp; Amen.