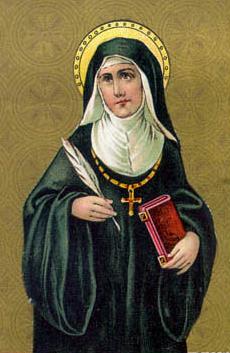 Saint Hildegard of Bingen was born into a noble family, she was instructed for ten years by the holy woman Blessed Jutta. When Hildegard was 18, she became a Benedictine nun at the Monastery of Saint Disibodenberg. Ordered by her confessor to write down the visions that she had received since the age of three, Hildegard took ten years to write her Scivias (Know the Ways). Pope Eugene III read it, and in 1147, encouraged her to continue writing. Her Book of the Merits of Life and Book of Divine Works followed. She wrote over 300 letters to people who sought her advice; she also composed short works on medicine and physiology, and sought advice from contemporaries such as Saint Bernard of Clairvaux.

Hildegard's exact date of birth is uncertain. She was born around the year 1098 to Mechtild of Merxheim-Nahet and Hildebert of Bermersheim, a family of the free lower nobility in the service of the Count Meginhard of Sponheim. Sickly from birth, Hildegard is traditionally considered their youngest and tenth child, although there are records of seven older siblings. In her Vita, Hildegard states that from a very young age she had experienced visions.

Perhaps due to Hildegard's visions, or as a method of political positioning, Hildegard's parents offered her as an oblate to the church. The date of Hildegard's enclosure in the church is the subject of a contentious debate. Her Vita says she was enclosed with an older nun, Jutta, at the age of eight. However, Jutta's enclosure date is known to be in 1112, when Hildegard would have been fourteen. Some scholars speculate that Hildegard was placed in the care of Jutta, the daughter of Count Stephan II of Sponheim, at the age of eight, and the two women were enclosed together six years later. The written record of the Life of Jutta indicates that Hildegard probably assisted her in reciting the Psalms, working in the garden, and tending to the sick.

Hildegard says that she first saw "The Shade of the Living Light" at the age of three, and by the age of five she began to understand that she was experiencing visions. She used the term 'visio' to this feature of her experience, and recognized that it was a gift that she could not explain to others. Hildegard explained that she saw all things in the light of God through the five senses: sight, hearing, taste, smell, and touch. Hildegard was hesitant to share her visions, confiding only to Jutta, who in turn told Volmar, Hildegard's tutor and, later, secretary. Throughout her life, she continued to have many visions, and in 1141, at the age of 42, Hildegard received a vision she believed to be an instruction from God, to "write down that which you see and hear." Still hesitant to record her visions, Hildegard became physically ill. The illustrations recorded in the book of Scivias were visions that Hildegard experienced, causing her great suffering and tribulations. In her first theological text, Scivias ("Know the Ways"), Hildegard describes her struggle within. 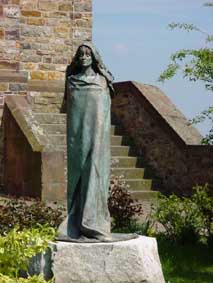 But I, though I saw and heard these things, refused to write for a long time through doubt and bad opinion and the diversity of human words, not with stubbornness but in the exercise of humility, until, laid low by the scourge of God, I fell upon a bed of sickness; then, compelled at last by many illnesses, and by the witness of a certain noble maiden of good conduct [the nun Richardis von Stade] and of that man whom I had secretly sought and found, as mentioned above, I set my hand to the writing. While I was doing it, I sensed, as I mentioned before, the deep profundity of scriptural exposition; and, raising myself from illness by the strength I received, I brought this work to a close – though just barely – in ten years. (...) And I spoke and wrote these things not by the invention of my heart or that of any other person, but as by the secret mysteries of God I heard and received them in the heavenly places. And again I heard a voice from Heaven saying to me, 'Cry out therefore, and write thus!'

It was between November 1147 and February 1148 at the synod in Trier that Pope Eugenus heard about Hildegard’s writings. It was from this that she received Papal approval to document her visions as revelations from the Holy Spirit giving her instant credence.

Before Hildegard’s death, a problem arose with the clergy of Mainz. A man buried in Rupertsburg had died after excommunication from the Church. Therefore, the clergy wanted to remove his body from the sacred ground. Hildegard did not accept this idea, replying that it was a sin and that the man had been reconciled to the church at the time of his death.

On 17 September 1179, when Hildegard died, her sisters claimed they saw two streams of light appear in the skies and cross over the room where she was dying.

Scivias I.6: The Choirs of Angels. From the Rupertsberg manuscript, fol. 38r.
Hildegard's works include three great volumes of visionary theology; a variety of musical compositions for use in liturgy, as well as the musical morality play Ordo Virtutum; one of the largest bodies of letters (nearly 400) to survive from the Middle Ages, addressed to correspondents ranging from Popes to Emperors to abbots and abbesses, and including records of many of the sermons she preached in the 1160s and 1170s; two volumes of material on natural medicine and cures; an invented language called the Lingua ignota ("unknown language"); and various minor works, including a gospel commentary and two works of hagiography.

Several manuscripts of her works were produced during her lifetime, including the illustrated Rupertsberg manuscript of her first major work, Scivias (lost since 1945); the Dendermonde manuscript, which contains one version of her musical works; and the Ghent manuscript, which was the first fair-copy made for editing of her final theological work, the Liber Divinorum Operum. At the end of her life, and probably under her initial guidance, all of her works were edited and gathered into the single Riesenkodex manuscript.

On May 10, 2012, Hildegard von Bingen was canonized in Vatican City by Pope Benedict XVI and proclaimed Doctor of the Church. 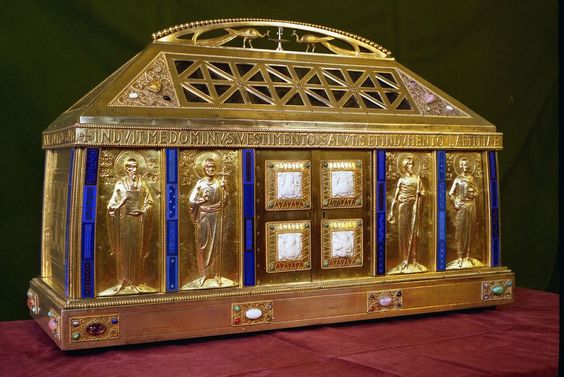 In 1632, during the Thirty Years' War, Rupertsberg Abbey was destroyed by Swedish troops. Hildegard's relics could be saved. They were taken to Cologne and then to Eibingen, near Rüdesheim in the diocese of Limburg. The body of Saint Hildegard still rests in the Benedictine Abbey of Eibingen, which she founded, the center of the Hildegard cult.

The Abbey of Saint Hildegard