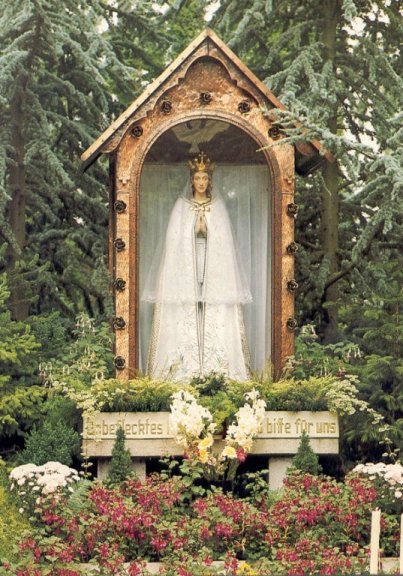 The numerous apparitions and visions of the seven seer girls of Heroldsbach (35 km north of Nuremberg) began on Oct. 9, 1949 with the green lucent sign “JSH” of Trinity above the birches. J meant “Jahwe”, H “Hyos” (Greek: son) and S “Spiritus Sanctus”.

After this the Holy Virgin Mary appeared above the birches praying with folded hands. She wore white clothes, had red roses on her feet and a black rosary. From the third apparition day on, the Mother of God carried the Jesus Child on her left arm. Until Oct. 31, 1952 the Holy Virgin Mary appeared mainly with a blue dress and a golden crown. She insistently wished prayers, penitence and expiation. From Jan. 13, 1950 on, the Mother of God left her place above the birches and came regularly to the seer children. They were allowed to touch her body and hands.

They could note her real presence combined with a fluent force. Furthermore they touched and carried the Jesus Child who later came also as boy, adult saviour, sacred heart, good shepherd and redeemer on the cross. Many angels and saints appeared as well, first of them St. Joseph. Special importance was transmitted through the seven saints with own missions: Pope Pius X (eucharist), brother Claus and Therese of Lisieux (humbleness), Maria Goretti and Aloysius (chastity), Antonius and Kreszentia Höß (against demonical affliction).

On the 9th day of the 9th appearance month, the Mother of God manifested her title for Heroldsbach as “Queen of Roses”, which shall mean queen of grace. During and since the time of the apparitions many healings and new religious awakenings took place.

The mother of God appeared at Heroldsbach also with warnings of war which can be prevented by praying.

After long lasting discussions about the authenticity of the apparitions, on March 1, 1998 Heroldsbach was officially inaugurated by the Catholic Church as center of prayer. It is a center of reversion and new evangelization, directed by Augustinian Canons with Father Dietrich von Stockhausen. The future will show us which importance will have that center in the history of the Holy Church.

Heroldsbach is located in the Franconian part of Bavaria, the federal state of Germany where Pope Benedict XVI comes from. In 2009 we celebrate the 60th anniversary of the apparitions with many activities. 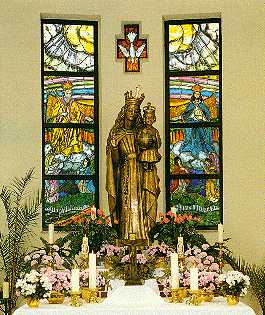 The pilgrims club of Heroldsbach has been existing since 1953 and campaigns for the authenticity of the apparitions and the build up and maintenance of the prayers’ place.
In the 70s the pilgrims’ home and the big pilgrimage church were built by the club. The acting president Christoph Langhojer represents the interests of the club in the foundation council. It is approved by the church, consisting also members of the catholic church.