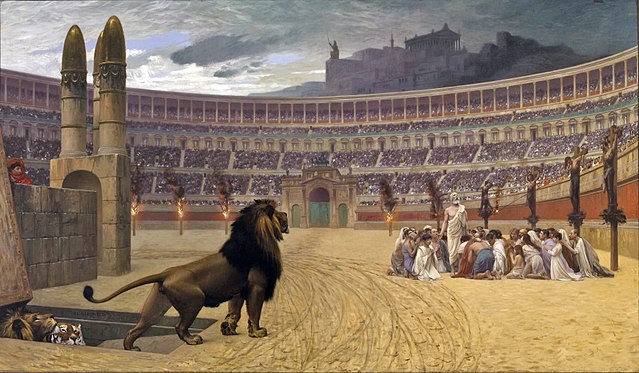 On June 30, we commemorate the first Christian martyrs who fell during the reign of Emperor Nero after the Great Fire of Rome in AD 64.

In the first century of the era, Rome was a melting pot of all kinds of religions, religions and sects. Yet the Christians occupied a special place. They were known only through rumours.

Because the Christians initially adopted the Jewish custom of not calling God by name, the Romans believed that they were atheists, an impossibility in those days. That idea was reinforced by the fact that they had no images. Others, however, reported that child sacrifices were made, that their flesh was eaten and blood drunk…
Still others knew that their sexual morals were quite different from the Romans, and that they led women to remain virgins rather than marry. An excellent breeding ground for suspicion when you need a scapegoat.

This was the case after the infamous fire of Rome in 64. To this day, it is generally assumed that the emperor had them set himself. He loved to declaim Homer on his platform overlooking the city's poor slums. He wanted to visualize as vividly as possible the fire of Troy that would eventually lead to the foundation of the city of Rome. That's why he had the slum below set on fire… Besides, he immediately made more room to expand his golden palace. There were hundreds of casualties. To quell the rumors that pointed to him as guilty, he had Christians arrested and tortured to death in sophisticated ways.

Thus there was a group that was crucified; others were sewn into animal skins and thrown before the wild beasts, whereby they were cruelly torn to pieces; a third group were also sewn into animal skins, but then doused with pitch and oil to serve as torches to illuminate the emperor's gardens. Although their dates of death are usually estimated several years later, there are still scholars who believe that both Peter and Paul were among these first-generation victims.

In retrospect, these first persecutions formed a prelude to several periods of Christian persecution in the first three to four centuries of our era.

Very many Christians were martyred; in the Catholic Church they were therefore canonized.