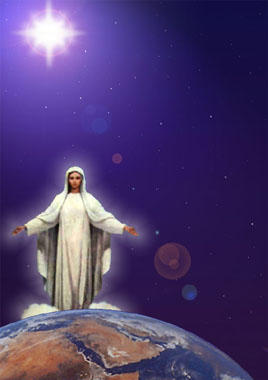 The apparitions in Eisenberg, Austria, took place between October 13, 1955 and December 22, 1982 to Aloïsia Lex, mother of 11 children. Eisenberg is located at the three country border of Hungary, Slovenia and Austria. Eisenberg belongs to the parish of St. Martin a / d Raab. Here the Mother of God appears to a peasant woman. At the command of God, an angel has inscribed a cross about three feet long in the ground. There is no scientific explanation for it. It cannot be copied or destroyed by professionals. The messages Mother Lex receives are in line with the warnings to humanity and the recurring demands for repentance, penance and prayer, especially the rosary.

Mary says: "... Only through the Rosary can faith be sincerely preserved. Those who pray the Rosary daily bring Me much joy and comfort My Immaculate Heart. Those who reject it show Me bitter sorrow. For those who daily My Immaculate Heart. standing aside with the rosary, the reward in heaven will be great. Through the daily rosary, My Immaculate Heart is honored and comforted because it is atonement and penance. It honors the Lord. The sign of the Holy Cross in the grass and the many signs in heaven, which also priests have experienced, must make them understand that heaven admonishes and warns, they must no longer doubt the authenticity of My appearances and messages and the holy cross in heaven, because through this the truth and the authenticity of the Sign of the Holy Cross in the grass pressed into the ground by heaven is confirmed.

If one does not recognize the astonishing Sign that was pressed into the ground by heaven, and also all other signs in heaven, in the water and the healings as signs of love and mercy and Salvation, it will be for those who do not believe and when the - great sign of the Holy Cross in heaven - will appear, become a sign of judgment to them. I wish, however, that through the recognition and glorification of the Sign of the Cross in the grass, as well as through prayer and penance, the sign of the Holy Cross in Heaven when it appears, may benefit all people as a sign of love. , salvation and blessing. There is no greater sign than the cross. Either they want victory or defeat. The prince of hell does not give up. If he loses now, he has lost forever. he knows that. When the great Sign appears in the sky, it will pass through the soul like a sword. To the good it will bring strength and cowardice, and they will be strengthened and overshadowed by the mercy of God. I will cover them with My mantle. The disbelievers and mockers will pierce this Cross in Heaven like a sword and they will fall desperately in fear and terror and many will not survive it .... "

Also about the belief in the Most Holy Sacrament very serious messages have been given here: "... Jesus now feels just as abandoned, forgotten and humbled in the Tabernacle, as then in His agony on the Cross at Calvary. For a second time it can be done. He no longer saves people, as then, because they no longer want to believe that the Holy Mass Sacrifice is the great Work of Redemption, which He offers Himself anew every day at the Holy Mass, that He is represented in the Most Holy. do not recognize anymore, because of this the graces are lost .... because of this Jesus suffers greatly in His Blessed Sacrament ".

The message of December 7, 1971: "... the last grace period is coming to an end. A terrible punishment is at hand; the world is in the sign of a terrible nuclear war. But through prayer, sacrifice and penance !!! still be turned away ... If My urgent calls to prayer, penance, as well as many prayer storms are not heeded, the bloodshed of many millions of people can no longer be prevented. One day it may be too late for time and eternity and I have to watch with pain how many millions of people are lost forever, because no one sacrifices and prays for them! Because all my messages and appearances are not recognized up to now, the gate of Divine Mercy and Love is slammed shut and the gate of hell opened wide ”.

The Mother of God had promised mother Lex that She would appear one more time before the criminal court would break loose. This last announcement took place on December 22, 1982. Mother Lex says: "It was about 5 o'clock in the morning of December 22nd. I was lying awake in bed. Suddenly in the dark bedroom I saw the Cross light up in the ground. Above it stood the Mother of God, dressed as in Fatima. At first I did not understand what the Mother of God said. The cupboard and the walls had disappeared and I looked as if through an opening in the grass floor about 20 meters from the distant Cross. From there approached the Most Holy Virgin. She was very tall with a crown, which almost reached the ceiling. She stopped in front of my bed and said, calming my great nervousness with a mild look: "Don't be afraid! I have come to keep the promise I gave you more than 20 years ago. Now is the time. The world is facing catastrophe. The world powers are preparing for war like never before. The great supremacy of godless world communism will come unexpectedly over the still free countries, because communism recognizes no borders. The great world catastrophe will follow. I say the same as once in Fatima! ”A terrible fear filled me because of the inability to make this terrible message known to the world, because it would meet with disbelief everywhere.

Mary repeated Her call of December 7, to make the message known to all Bishops and priests as soon as possible and it is the very last ray of hope for the world when She then says: the Bishops and priests would put themselves at the head of a prayer storm. Hurry! This must be done as soon as possible! All messages from mother Lex end with: "Praise be to Jesus Christ; Avé Maria forever! "

The Roman Catholic Church has taken a negative decision about the authenticity of the apparitions in Eisenberg. 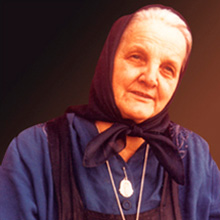