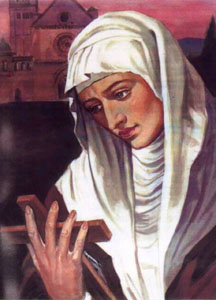 Saint Agnes of Assisi was born 1197 at Assisi, Italy. She was a daughter of Count Favorino Scifi and Blessed Hortulana, ant the younger sister of Saint Clare of Assisi, the Abbess of the Poor Ladies. Her saintly mother, Blessed Hortulana, belonged to the noble family of the Fiumi, and her cousin Rufino was one of the celebrated "Three Companions" of St. Francis. Agnes was a beautiful girl. As a little girl she was known by members of her household to be a sensitive child, gentle, prayerful and kind. Clare heard Saint Francis of Assisi preaching in the streets of Assisi about his new mendicant order and was moved by his words. When she was about 13 years old, she refused marriage, stating that she could have no spouse but Jesus Christ.

On March 18, 1212, her eldest sister Clare, inspired by the example of Francis, left her father's home to become a follower of the saint. Sixteen days after her sister Clare renounced her inheritance and family and founded the Poor Clares, the Franciscan cloistered Order, Agnes joined her at the Benedictine cloister of St. Angelo in Panso, where they received their initial training. The family tried to bring Agnes back by force, dragging her from the monastery, but her body became so heavy that several knights could not budge her. Her uncle Monaldo tried to beat her, but was temporarily paralyzed. The family then left Agnes and Clare in peace.

The name of Agnes was given to her by Saint Francis, when he cut off her hair with his own hand, gave her the habit of Poverty and he choose her to found and govern a community of Poor Clares at Monticelli, near Florence. In 1216, Clare accepted the role of abbess at San Damiano, and defended her order from the attempts of prelates to impose a rule on them that more closely resembled the Rule of St Benedict than Francis' stricter vows.

Not the least important part of Clare’s work was the help and encouragement she gave to her spiritual father, Francis. It was to her that he turned when in doubt and it was she who urged him to continue his mission in preaching when he thought his vocation lay in becoming a hermit. After receiving the Stigmata, blind, ill and dying, Francis came for the last time to San Damiano. Clare built a little reed hut for him outside the cloister and tended him. It was there that he composed his magnificent “Canticle of the Creatures”, in the spring of 1225.

Agnes died on November 16, 1253 at the monastery of San Damiano of natural causes died at the age of 56 in 1253, shortly after her sister Clare. From this one can deduce that she was born in 1197. She was buried in the Santa Chiara church, Assisi, Italy. God, Who had favoured Agnes with many heavenly manifestations during life, glorified her tomb after death by numerous miracles.

On August 15, 1255, Pope Alexander IV canonized Clare as St Clare of Assisi. In 1263, Pope Urban IV officially changed the name of the Order of Poor Ladies to the Order of Saint Clare.