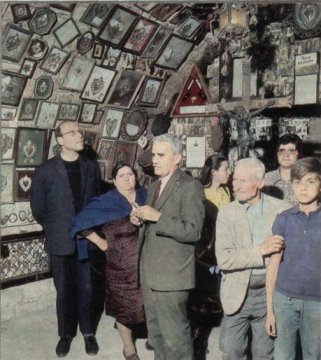 The principal seer of Tre Fontane, Bruno Cornacchiola, was born on 9 May 1913, and thus he was 33 at the time of the apparition on 12 April 1947.
He came from a poor background, and had received only rudimentary religious instruction. After military service, at the age of 23, he married Iolanda Lo Gatto, and to earn money decided to fight on the Nationalist side in the Spanish Civil War, although he was actually more inclined towards communism. Once in Spain he came under the influence of a German Protestant, who managed to convince him that the papacy was the cause of all the world's ills. Bruno at once conceived a hatred for the Church and vowed that he would kill the Pope; nor was this an idle threat—he bought a dagger in Spain especially for this purpose, carving on it the words: "Death to the Pope."

On the Saturday after Easter Sunday, April 12, 1947, Bruno Cornacchiola took his three children (Isola, Carlo, and Gianfranco) for a picnic to Tre Fontane (the area outside of Rome where the Romans beheaded St. Paul). On that lovely spring day, Bruno sat in a grove a eucalyptus trees preparing a talk ridiculing the Immaculate Conception. Earlier that day, as if to manifest his bitter hatred for the Immaculate Mother, he had written on the base of a statue of the Holy Virgin that had the inscription Virgin Mother that “You are neither virgin nor mother.”

Bruno though once a Catholic had now not only thoroughly rejected the Catholic Faith, he had conceived a great animosity towards Catholicism. Shortly after marrying his wife he deserted her to fight on the side of the anti-Catholic forces during the Spanish civil war in the 1930's. Later he returned to his wife, but he was far from a model husband. He frequently used blasphemous and obscene speech, committed adultery, beat his wife, and had forbidden his wife from going to a Catholic church or in anyway practicing her faith. He joined the Seventh Day Adventists, becoming an ardent proselytizer. To cap his anti-Catholic career, Bruno plotted to assassinate the Holy Father (Pius XII) on September the 8th (Feast of the Nativity of the Blessed Virgin Mary) 1947. 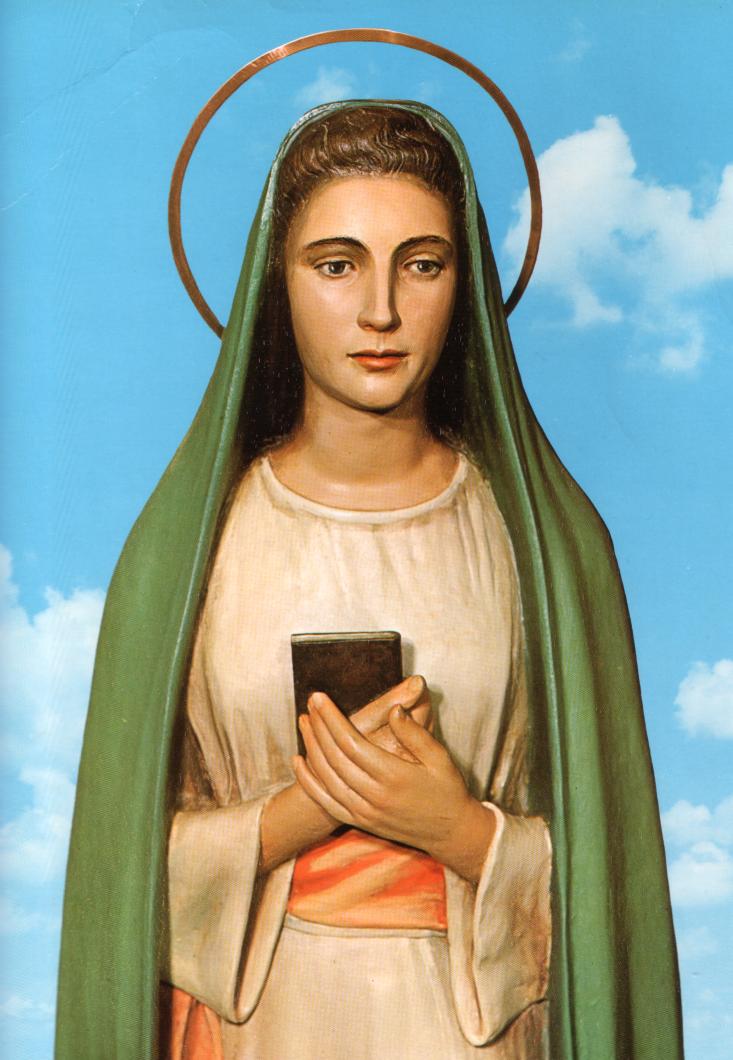 As Bruno was busily working on his screed against the Immaculate Conception, one of his children asked him to help them find their ball. He followed the child and saw his youngest child kneeling at the entrance of a cave. The child's face was radiantly joyful as he stared into the cave repeating, "Beautiful lady, beautiful lady." Bruno looked into the cave and could see nothing that would account for the boy's action. He then turned towards his other two children, but by then they too were kneeling with their eyes transfixed on someone in the cave. Seized with fright, Bruno tried to grab his children and carry them away, but he could not move them. Then, in the midst of an intense perfume of flowers, she appeared to Bruno as well. The Virgin was dressed in a long, brilliantly white dress with a rose-colored sash. Over her black hair was a green mantle which extended to her bare feet. She was holding a dark gray book close to her heart. The book was the story of revelation, the Bible.

The Lady told Bruno who she was: "I am the one who is of the Divine Trinity". She revealed herself as, "Daughter of the Father, Mother of the Son, and Spouse and Temple of the Holy Spirit". Mary Immaculate in this message confirmed her unique intimacy with the Blessed Trinity. Our Lady also announced to Bruno that “I am the Virgin of Revelation.” This title is fraught with religious significance - the Church’s teaching on Mary is based on Divine revelation Sacred Tradition as well as the Bible comprises Divine Revelation; Mary Immaculate is the Woman mentioned in the mysterious last book of the Bible, the Apocalypse or Revelations of St. John the Apostle. The Holy Virgin admonished Bruno: "You persecute me. Enough of it now! Enter into God’s Kingdom on earth. The Nine First Fridays of the Sacred Heart has saved you. You must be like flowers which Isola picked, they make no protest, they are silent and do not rebel". The Virgin spoke to Bruno at length about many things on that April afternoon, including her Assumption into Heaven: "My body could not decay and did not decay". She indicated to Bruno how he would recognize two priests who would help him reconcile himself to God and to the Pope whom Bruno had wanted to kill! One of the promises that the Madonna made was: "With this sinful soil, I will work powerful miracles for the conversion of unbelievers."

Then She continued: "I want to give you absolute proof of the divine realty which you are experiencing, so that you will exclude any other motive for this encounter, evil motivation included. This is the sign: Every time you meet a priest in church or in the street, approach him and address him with these words: 'Father I must talk to you.' If he answers: 'Ave Maria! - My son, what do you want?', beg him to stop because he is the chosen one. Tell him what your heart dictates and obey him. "In fact, he will direct you to another priest by saying, 'He is the one for you.' Afterwards you will go to the Holy Father, the Supreme shepherd of all Christians, and give him My message personally. The one that I will point out to you will take you to the Pope. Some people to whom you relate this vision will not believe, but let that not disturb you." After these words, maternally benign and serenely said, the enchanting Lady turned, showing Her green mantle. Slowly she moved in the direction of St. Peter's Basilica. Bruno, being ecstatic, did not move for a few moments. The Virgin had lowered her compassionate glance on his poverty to give him guidance, strength and comfort.

Bruno and the children cleaned the grotto as best they could and he chiselled the date of the apparition with his house key on the spot where the Virgin had stood. The rest is history. Bruno's conversion took place immediately and he eventually gifted Pope Pius XII with the dagger he was to kill him with. She appeared to him another three times. Word spread and the wooded area once known as a "brothel" on the outskirts of Rome became a site of pilgrimage to the Virgin Mother of God. Mary’s visit and remonstration was not wasted on Bruno. He repented of his sinful life and became an outstanding Catholic. Still living, Bruno, who has become another Paul, has dedicated his life to evangelizing and teaching the truths of the Catholic Faith.

From that moment, the Grotto has been a gathering place for thousands of the faithful. Every 12 April, the Apparition is commemorated with a solemn celebration. The procession of 5 October 1947 remains a memorable one. The Franciscan Conventual Friars Minor were given custody of the Grotto of the Three Fountains in 1956. In 1997 the Holy Father, Pope John Paul II, approved the renaming of the place as "Holy Mary of Third Millennium at Three Fountains".

A definitive judgement, either positive or negative in regard of Tre Fontane, has not been made by Rome. 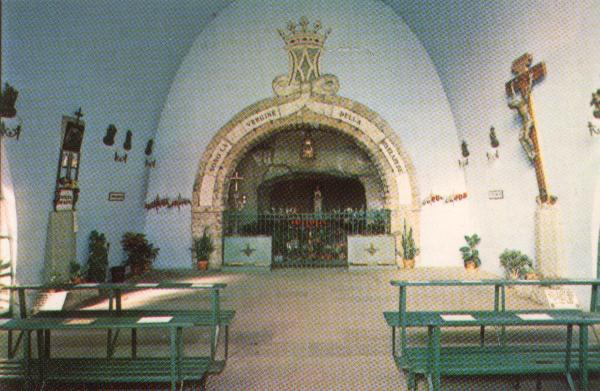 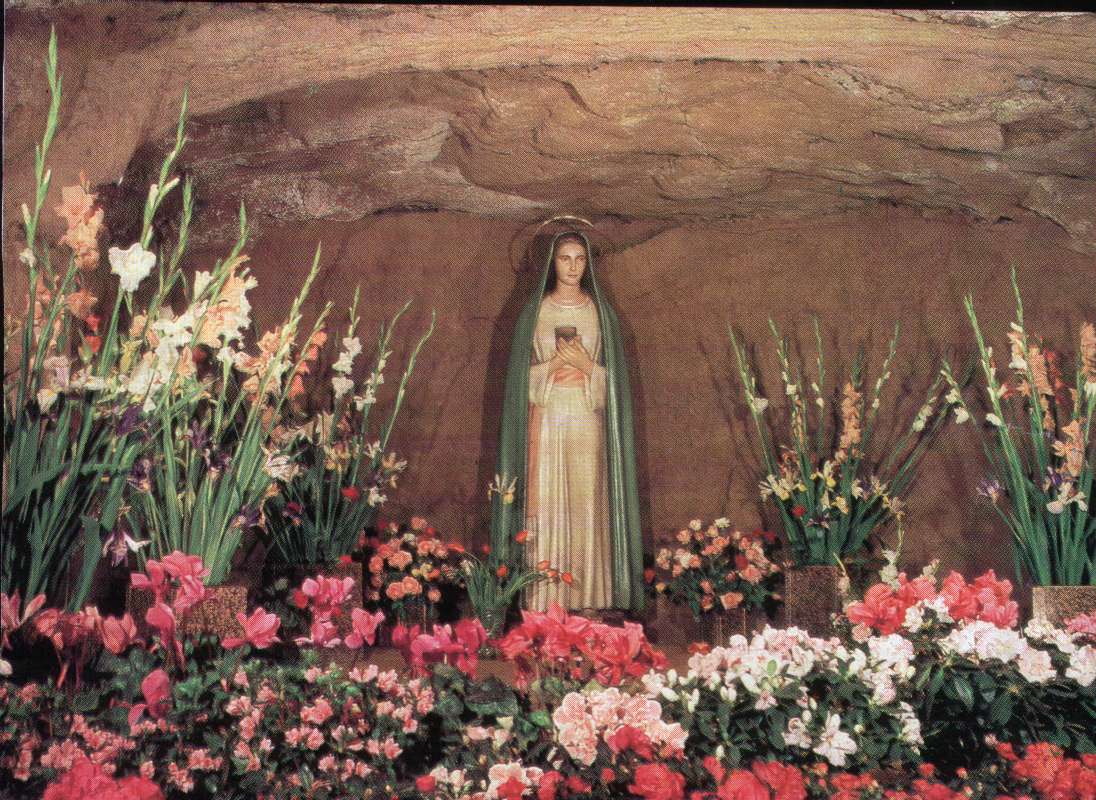