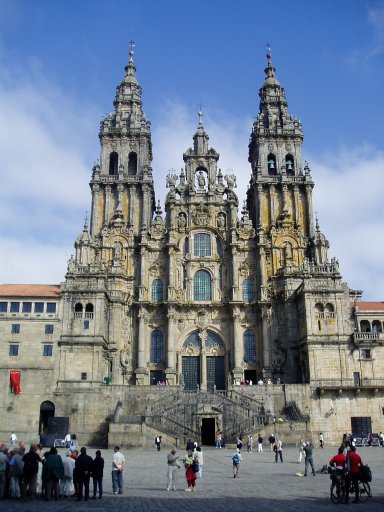 Cathedral of Santiago de Compostela
end of the pilgrimage route

James the Greater was one of Jesus’ closest friends, as were Peter and John. Son of Zebedee and Salome, brother of Saint John the Apostle, James may have been Jesus' cousin. He is called "the Greater" simply because he became an Apostle before Saint James the Lesser. Following Good Friday, The Resurrection, Ascension of Jesus into Heaven and that wonderful decent of The Holy Spirit at Pentecost, James commenced his own ministry. He spread the gospel, first over Israel and then over the Roman Empire. Later, he traveled to the Iberian Peninsula, arriving about 40 years after Christ, in the village of Saragossa, in Northeastern Spain. Nine others accompanied him on this journey. The name James is “Sant Iago” in Spanish. The country of his choice did not react very enthusiastically to the Good News. This caused him to be very sad. One day, whilst he was at prayer, the Blessed Virgin appeared to James in a vision. She was atop a pillar of jaspar carried by the angels and she was holding a small wooden statue of herself. She gave the pillar and statue to James requesting that a church be built on the same spot, in her honor, and the items she gave him were to be used on the altar. He built a small chapel for her, which later was replaced with the Basilica on the same spot. In the vision she also recalled him to Jerusalem. So after the chapel was completed, he returned to Jerusalem where he was martyred by Herod in 44 AD.

Because he was denied burial after his martyrdom, his followers took his remains to Compostela, Spain. There they found a suitable burial ground. Centuries later the Moors forced their way into Ibiza and took over the entire peninsula in 711. Nobody thought about St James’ remains, or his grave. It wasn't until the ninth century that rumours spread that the tomb of James, the Apostle, was in Northern Spain. It was Charles The Great who conquered the grave of the “unbeliever” and demanded large pilgrimages to Compostela. A chapel was built above James' remains. Soon after, this chapel became too small and a new and much larger Church was built. This Church was consecrated in 889 and remained standing for nearly a century when in 997, the Moors burned it down. St James’ tomb had become the centre of the small town, Santiago de Compostela. Flavia, Bishop of Iria, took up his holiday residence there, which provided advantageous to Compostela. It was time to build a new cathedral. Blessed in 1211, the Cathedral of Santiago still stands today. 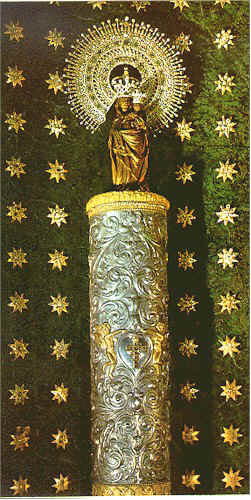 Since approximately 1100, Santiago de Compostela has been the most frequently visited place of pilgrimage, after Rome and Jerusalem. During the reformation in the 16th century, interest diminished until Pope Leo declared it a shrine, which it still is today. Pilgrims from all over Europe have been going there for centuries. Often they take months to arrive, driven by the primitive desire to see what is beyond the horizon. Were they the forerunners of today's long distance runners and cyclists? Pilgrims may take anywhere from 5 weeks to 3 months to get there, walking 30 kilometers a day. They sleep at night in dormitories where fifty men and women lay snoring. They awake and start walking at 6 a.m. with backpacks on. The 4-Day Walk, done in Nijmegen (Holland) every year, is child’s play compared to this. More and more Dutch men and women take part in this long walk. 2004 was declared a "Holy Year" since the feast of St. James fell on a Sunday. 300,000 pilgrims, from all over the world were expected in Santiago de Compostela on that day alone. Real pilgrims, begin the journey from their homes, villages and towns, but many others begin their walk from either Vezeley or St Jean Pied-du-Port, 1600 kilometers and 780 kilometers, respectively from their target.

Why this great interest in Santiago de Compostela? Why walk that distance? Why dismiss worries about the difficulties one might encounter on the journey? Why do so many people aged 60+ make this journey? Why? Why? Why? There is no simple answer. There are many reasons and combinations of reasons that one might be motivated to make this journey; religion, spirituality, culture, sport, adventure, to name a few. While paying homage to St James may seem old fashioned, spiritual reasons do rate high. If we want to contemplate the meaning of life, 100 days gives one plenty of thinking time!!! In Holland, walking to Santiago de Compostela is the thing to do. The walk contributes to improving one’s outlook on life, brings one in closer contact with the beauty of nature and expands one’s cultural horizons through contact with other pilgrims. Everyone experiences this journey differently; in a uniquely personal way. It takes an enormous amount of energy, but then you receive much more energy by doing it. Whatever the pilgrims may think of the cathedral in Santiago de Compostela once they arrive, it is for certain that the journey itself will be their most profound and memorable experience. 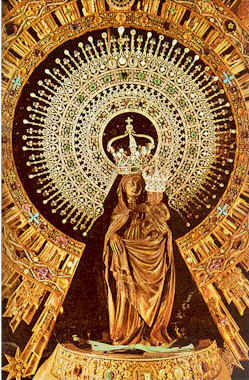 The main entrance is found on the Plaza del Orbradoiro and is reached via a monumental stairway. Saint James is to be found in the centre with his hand resting on a walking stick. The central pillar of the door is known as: "the Pilgrims' Pillar", because every pilgrim who enters rests his hand there, as if to say, “I have gotten here safely”. Above the main altar, in the far off eastern corner of the building, you see a statue of St James.
The apostle's grave is to be found in the crypt behind the main altar. The pilgrim has completed his journey upon kissing the hem of the jeweled cloak that drapes the statue. There is a museum displaying the rest of the Cathedral's treasures.

The Symbols of Saint James: 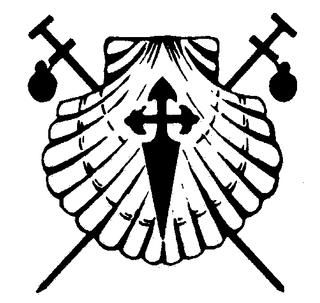 Originally, St James was depicted as an elderly apostle. Up until the 12th century, he was depicted with only one apostolic symbol…the Bible. Later, a sword was added, at first to remind us that he was beheaded and then also to represent his status as patron of warriors, knights and fighting men. This sword is often seen as the St James Cross, which is a red, cross-shaped sword with St James in the middle. It is formed by a Cross Flory, (a cross with the ends of the arms shaped like a fleur de lys.) where the lower part is fashioned as a sword blade, making this a cross of a warrior. Since the middle ages, he is also depicted as a pilgrim father with a large walking stick, bottle of water and St. James ship. One legend tells us how a knight with his runaway horse fell into the sea and asked St. James for help. The knight remained afloat and when he got ashore, he discovered that he was covered in shells. St. James’ shells are to be found in Galicie, on the Northern coast of Spain.

Patron Saint of Spain, of pilgrims, of St. James guild: workers, chemists, haberdashers and soldiers. His intercession is sought by many with rheumatism and he is also the patron saint of the city of The Hague.

Three very unusual things about the Virgin of the Pillar:

It is unknown when James was first declared a saint. 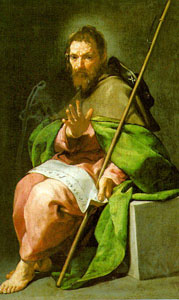 O glorious Apostle, Saint James,
who by reason of thy fervent and generous heart, was chosen by Jesus to be witness of His glory on Mount Tabor, and of His agony in Gethsemane.
Thou, whose very name symbolizes warfare and victory, obtain for us strength and consolation; that having constantly and generously followed Jesus, we may be victors in the strife and deserve to receive the victor's crown in heaven.
Amen. 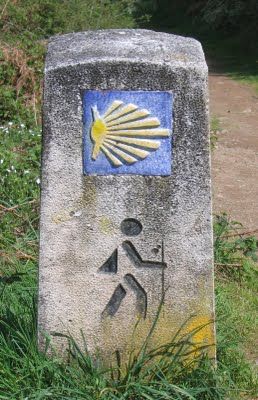