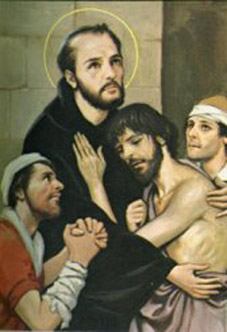 Saint John of God was born Juan Ciudad on March 8th, 1495 at Montemoro Novo, Evora, Portugal, of poor but very devout Christian parents. At the age of eight he left home and worked as a shepherd for a farmer, who was very pleased with him. John had an offer to marry the farmer's daughter and become heir to the property; but he refused because he wanted to pursue a spiritual life.

Except a shepherd, John of God was many things in his long life: a soldier and mercenary, a book seller, a servant, and a hospital administrator. Everything he did seemed a little crazy. In everything he did, no matter how crazy and impulsive it seemed, John of God was following the will of God. Every time he saw a need, he saw one of God's children in need, and he jumped to serve them and God. 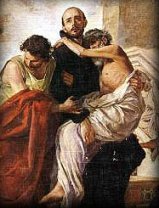 He was converted on Saint Sebastian's day, the 20th of January, whilst listening to a sermon by the man who was later to become his spirital leader and encourage him in his quest to improve the lot of the poor: Saint John of Avila.

After years of wandering, when he was forty-five, he rented a house in Granada, Spain, and began caring for the sick, poor, homeless and unwanted. He gave what he had, begged for those who couldn't, carried those who could not move on their own, and converted both his patients and those who saw him. John's motivation was his great love of God and Our Blessed Lady. The house became a small hospital where every person in need was welcomed. Those who came to help John gradually formed a religious order for the care of the poor. They are called Brothers of St. John of God.

Before he died died on 8 March 1550 at Granada, Spain, his selfless dedication to the sick brought him to be known as "John of God". By faithfully following his example, the Order of Brothers formed after the death of St.John of God has passed on John's way of serving for those in need. It is called "Hospitality" and after five centuries it remains the charism of the Hospitaller Order of St. John of God.

In 1570 the fragrant body of the Saint was found entire, except for the tip of the nose. The relics are kept in a chest of beautiful wood in the Basilica of Saint John of God in Granada.

Patron: hospitals, the sick, nurses, booksellers, printers and those with heart disease. 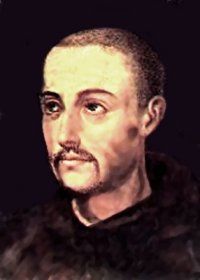 Saint John of God, help us to act out of love as soon as we feel the promptings of the Holy Spirit. Help us learn to fight the little voices in our heads and hearts that give us all sorts of practical reasons to wait or delay in our service of God.
Amen