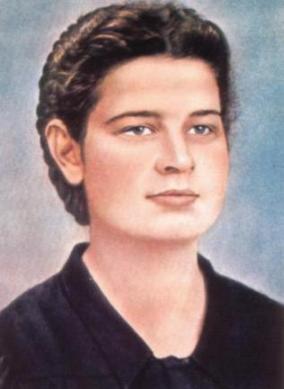 Martyr for Purity and Dignity of the Woman

Pierina Morosini, daughter of Roque Morosini and Sara Norris, was born on January 7, 1931 in Fiobbio di Albino, Bergamo, Italy. Pierina was the eldest of nine children in this impoverished family. She was a young, devout woman, known as to be deeply in love with God and a faithful Catholic. Pierina received the Sacrament of Confirmation at age 6 and began attending daily mass, rising at 5 am in order to attend mass at 6 am. After mass, she would return home and then travel ½ hour to the village to go to school. Pierina was very talented and was the best student in her class but her family was poor and at the age of 11 she had to leave her studies in order to go to learn the trade of tailoring. At age 15, she began working at a cotton spinning mill in Albino. Still attending daily mass, she joined the Third Order Franciscans, taking vows of poverty, chastity and obedience. 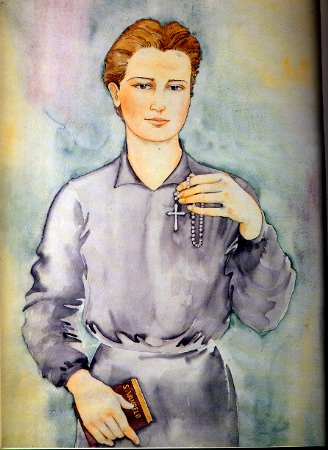 Pierina was very active in the Church, working as a catechist, collecting offerings for seminarians and doing other works. An important event in her life was her pilgrimage to Rome, in 1947, to attend the Beatification of Maria Goretti, during which she said, “It would be a great happiness for me to die like Maria Goretti.” Her friends responded by saying,” If you die as she did, we promise to come to your beatification.” Pierina was ready to suffer and having already received suffering from the Lord…she never complained.

Pierina was attacked by a 20 year old man on April 4, 1957. In defense of her virginity, she took a stone to hit her aggressor, but he took the stone from her and struck her on the head with it.
She fell down on the path where she was later found by her brother, Santo. The parish priest, who was called immediately, gave her the Last Sacraments and was then sent to a hospital in Benevento. She died on April 6, 1957.

Pierina was buried on April 9, 1957. Even then, she was already believed to be a saint and everyone wanted to tough her coffin. On April 9, 1983, her remains were carried from the cemetery to the parish church. Her body appeared to be in a good state of preservation.

When Pope John Paul II beatified her in Rome in 1987, he spoke of her as a symbol of purity in our violent, modern world. In his opinion, it is better to be a dead virgin than a rape survivor. “Like Blessed Margaret, a victim of rape and still a model of purity.”

Her canonization is pending.

Patron of rape victims and martyr of purity.

If you agree and want to support elevating Blessed Pierina to sainthood, you may contact: