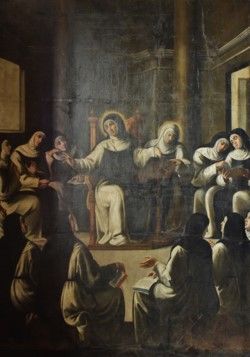 Saint Paula of Rome was born in Rome of a noble family on May 5, 347. She was the daughter of Blesilla and Rogatus, of the great clan of the Furii Camilli. Paula married Toxotius. The couple had five children: Toxotius, Blesilla, Paulina, Eustochium and Rufina. They were considered an ideal couple, but at his death in 379 she forsook the world, lived in the utmost austerity and devoted herself to helping the poor.

She met Saint Jerome in 382 through Saints Epiphanius and Paulinus of Antioch and was closely associated with Jerome in his work while in Rome. The death of her daughter Blesilla in 384 left her heartbroken and in 385 she left Rome with Eustochium, traveled with Jerome to the Holy Land and settled in Bethlehem under his spiritual guidance a year later. She and Eustochium built a hospice, a monastery, and a monastery, which Paula ran. She became Jerome's closest confidante and assistant, cared for and assisted him in his Biblical work, built numerous churches that would cause her financial trouble in her old age, and died in Bethlehem on January 26.

She is the patroness of widows.

Patroness of the Order of Saint Jerome.