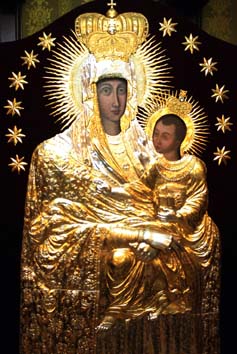 The First Apparition of the Mother of God in Europe

Siluva, Lithuania lies in Eastern Europe, on the coast of the Baltic Sea. In the north Lithuania borders with Latvia, in the east and south with Byelorussia, in the south-west with Poland and with the Kaliningrad region of the Russian Federation. Lithuania first accepted Catholicism in 1251 when her king, Mindaugas, was baptized in the Catholic faith. Because of the continual attacks and pillaging upon the country by the Teutonic Knights, the faith was not able to spread until after 1410 when the Knights were decisively defeated by Vytautas, the Great. A pious noble who was a close advisor to Vytautas, Petras Giedgaudas, built the first church in Siluva in 1457 in honour of the Nativity of the Blessed Virgin. Giedgaudas endowed the church with many rich gifts. It soon became for the people a place of fervent devotion to Our Lady. On each September 8th, people from all over Lithuania flocked to the church to commemorate the feast of the Nativity of Our Lady. The church burned down some 40 years later. In 1500, a new church was built on the site of the old one by Andrius Zavisa who inherited the Giedgaudas fortune.

When the Protestant Reformation swept over Europe, not even this little village escaped its impact. In 1532, the local governor became a zealous Calvinist as did many nobility and intellectuals . . . they in turn forced their will upon the people. The Catholics of Siluva were helpless to resist the repression of their Faith by the powerful gentry. Property owned by the Church was to be confiscated and the land turned over to the Calvinists. Influenced by the wave of Protestantism then sweeping Europe, his successor, John Zavisa, together with a number of Lithuanian nobles, accepted the Lutheran faith in 1532. Although he took possession of the church's lands, it seems that he did not take over the Catholic Church. He built a Lutheran chapel a short distance away. Lutheranism was strong in Siluva until 1550, when it gave way to Calvinism. In 1551, Melchior Zavisa, brother to John, took over the estates and the church of Siluva.

Eighty years passed and the Catholic flock, with no shepherd to guide and nourish it, gradually died out. Only a few of the very oldest villagers dimly remembered that there had been a Catholic Church in their village. Children were reared in the Calvinist creed. Suddenly, through an apparition of the Blessed Virgin Mary, God miraculously intervened. This apparition has been proven an actual event, authenticated by a Papal Decree issued by Pope Pius VI on August 17, 1775. The most remarkable feature is the fact that the miracle took place in a completely un-Catholic atmosphere.

The Second Apparition of the Mother of God

One summer day, in 1608, a number of children were tending their sheep in a field on the outskirts of the village of Siluva. They were playing near a large rock, close to a wooded section of the field, shouting merrily to one another in carefree fun. Suddenly one after another stood transfixed, staring in the direction of the rock. In the silence, there could be heard the sound of loud sobbing. Then the children beheld a beautiful young woman standing on the rock holding a baby in her arms and weeping bitterly. Her overwhelming grief was only too evident. She did not speak, but looked at them sadly as she stood there, weeping as though her heart was breaking. So profuse were her tears that they ran down her cheeks and some of them splashed on the rock. The woman was dressed in flowing blue and white robes, unlike any costume with which the children were familiar. Her long, light-brown hair fell softly over her shoulders. A strange light surrounded both the woman and child. When the children returned home in the evening, they told their parents and neighbors about the weeping woman. 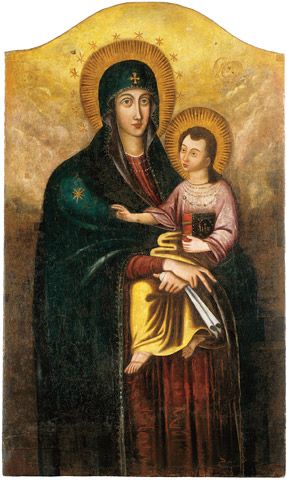 One boy ran to the Calvinist catechist to relate what they had seen. Word of this spread rapidly, and next day, a large number of people went to the place where the Woman appeared. Some were scoffing loudly, but others were impressed by the children's tearful insistence that they were telling the truth. This was proven because, whether the children were questioned separately or together, each told the same identical story, even to the smallest detail. The Calvinist catechist was also present together with the rector of the Calvinist seminary, Saliamonas Grocius. The catechist upbraided the people for listening to what he called the tales of the children. He tried to explain that, if someone did appear, it was the devil himself who was attempting to draw them away from the Calvinist faith. As he was speaking, the Woman again appeared on the rock as She did the day before, very sorrowful with tears in her eyes holding a Child in her arms. She appeared just as the children had related the day before. The assembled people became very frightened and not one dared to say a word. The Catechist himself, frightened as he was, got enough courage to ask: "Why are you crying?" The Woman, in a very sorrowful tone, answered: "Formerly in this place, my Son was honoured and adored, but now all that the people do is seed and cultivate the land." Having said this, the Woman disappeared in the sight of everyone present.

The apparition was seen by many people, so it was useless for the Calvinist leaders to deny it. They tried to explain that it was nothing but the work and trickery of the devil. The people were dumbfounded and many of them didn't know what to say or believe. In many apparitions of the Blessed Mother there is usually a picture or statue associated with the event. Our Lady of Siluva is not an exception. A blind man, more than 100 years old, lived in a nearby village. The stories of the apparitions reached him and he recalled a night, some eighty years before, when he helped Father Holubka bury an ironclad chest filled with church treasures beside a large rock. The villagers led him to the field of the apparitions to see if he could help locate the place where the treasures were buried. No sooner had he reached the spot, when his sight was miraculously restored. Falling to his knees with joy and gratitude, he pointed to the exact spot where the chest had been buried. The ironclad chest was dug out of the ground and when it was opened, there – perfectly preserved – was the large painting of the Madonna and Child, several gold chalices, vestments, church deeds, and other documents. The painting was enshrined permanently in the Basilica of the Birth of the Blessed Virgin Mary and is venerated to this day as the Miraculous Image of Siluva.

Over the years, many miracles have been recorded and the shrine has experienced numerous changes and larger churches had to be built to accommodate the pilgrims. Devotion to Our Lady of Siluva was growing until World War II brought about the destruction of freedom in Lithuania. Since then, this world has seen many changes. We find ourselves surrounded by moral decay and many have lost their way. Today, Our Lady of Siluva is our most powerful intercessor before Almighty God. It may be asked why these apparitions are not better known in the Catholic world. In 1795, at the time of the Great Partition, Lithuania was taken over by Russia. Until 1918, Russia ruled her with a very heavy hand. It was forbidden to teach the language, the press and religious book printings were suppressed, and travel was limited. Such restrictions stymied the apparition's story to be told.

During the independent years between 1918 and 1940, know-ledge of the apparition spread through Europe and devotions increased. Under Soviet occupation, devotions continued in a very subdued yet, constant state. Presently, renewed interest in Catholicism's history in Lithuania has heightened devotions to Our Lady of Siluva. Pope John Paul's visit in 1993 allowed the world to view this remarkable site. As the Mother of God appeared to and fortified Lithuanians in their darkest hour in 1608, She again blesses the people of Lithuania with freedom of faith. Our Lady of Siluva is a painting, and a church, but more than anything else she is the figurehead of Lithuania's unfailing Catholic faith during centuries of persecution, trial and hardship. 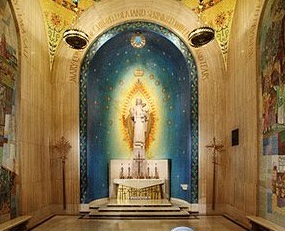