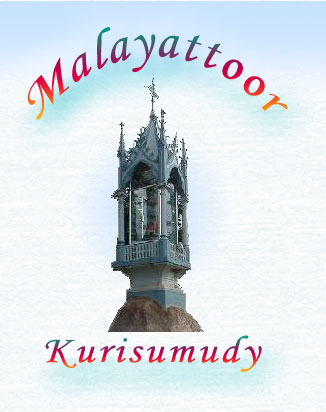 The Sanctuary of Saint Thomas

Kurisumudy is a mountain at Maiayattoor, 1269 'Ft. above sea level.Kurisumudy has its fame as a place visited by St. Thomas, one of the Apostles of Jesus Christ. Jesus gave a mandate to his Apostles to go out to the whole world and to proclaim the Good News. Taking upon himself this commandment, Thomas set out to India and landed at Kodungalloor in AD 52. He spent 20 years in India travelled through different parts of this great country of spirituality.

Upon his visit to India St. Thomas visited Kurisumudy too. His missionary expeditions took him far and wide and while travelling through the famous caravan route from Kodugalioor to Madras St. Thomas came to Malayattoor. A hostile reception was in store and his life was in danger. He was forced to flee to the top of the mountain and he spent days together in prayer. According to the `Ramban Paattu' , St. Thomas went up the mountain to converse with the Lord.

Malayattoor a meeting place of mountain and river shot into prominence when she was blessed by the missionary work of St. Thomas the apostle of Jesus Christ. He set foot at Kodungalloor, in AD 52 and founded the famous seven churches. On his way to Mylapore, he stopped at Malayattoor.

A hostile reception was given and his life was in danger. According to the Ramban Paattu, he was forced to flee to the top of the mountain and had spent days in the abode of God. In deep anguish and agony St. Thomas prayed to the Lord and upon touching the rock, blood sprang forth from it. In AD 52 he reached Malayattoor and selected the place for prayer and worship. His zeal for the Lord took him to Mylapore and later died a martyr's death there in AD 72.

Later, while on hunting the local people found a divine light emanating from the hard rock and upon examining the source they found a golden cross. They later discovered the footprints of the great saint and when this extra ordinary piece of news reached the plains, people began to flock the hills of Malayattoor 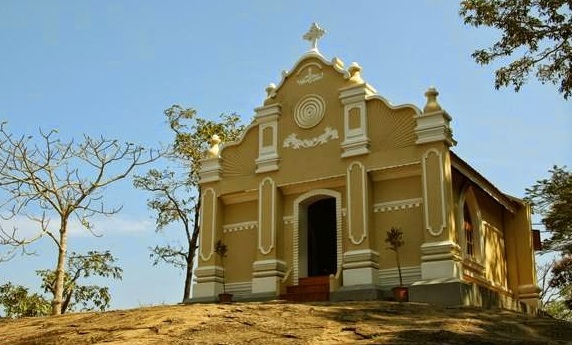 St. Thomas is believed to have landed in Kerala at Kodungallur (Cranganore) in AD 52. Oral tradition says that while travelling through Malayattor, faced with hostile natives, he fled to the hilltop where he is said to have remained in prayer and that he left his foot prints on one of the rocks. According to beliefs, during prayer, he touched a rock, upon which blood poured from it. The chief festival is on the first Sunday after Easter. It is traditionally believed that St. Thomas used to make the Sign of the Cross on the rock, kiss it and pray at Kurisumudi. The story has it that a miraculous golden cross appeared at that particular spot. Pilgrims going up the hill to call out incessantly "Ponnum Kurishu Muthappo, Ponmala Kayattom", meaning "O Patriarch of the Golden Cross! Climb we shall, this golden hill!" This Shrine was promoted to Archdiocesan status by Archbishop Mar Varkey Vithayathil on 4 September 1998. There is also a very ancient Church in the name of St Thomas (Estd. 900) at Malayattoor on the bank of Periyar River which serves as the parish Church at present. The annual festival of this church is known as 'Malayatoor Perunal' and it is celebrated in the months of March–April.

St. Thomas and Thamizakam :The place of St. Thomas in the life of Tamil believers is something not to be overlooked. Anyone would be moved at the sight of an ardent but the simple faith of a Tamil pilgrim, a usual scene on the mountain. According to Rt. Rev. Dr. Soosa Pakiam the "Archbishop of Trivandrum, "Muthappan" the name by which the devotes invoke St. Thomas on the mountain, may have come from Tamizakam. A good number of pilgrims that visit Kurisumudy and seek Muthappan's blessings is from Tamil Nadu. The vital role played by the caravan route that existed between Kodungalloor and Madras from time immemorial has certainly contributed to this spiritual and cultural bond that exists between Kerala and Tamil Nadu. Later on the hunters went to the mountain for hunting.While they stayed in the night they saw a glittering sign of cross on the rock.Out of curiosity they struck there with their rude weapons. To their surprise blood gushed out. They ran to the valley and told the locals. They went to the mountain and while they prayed there they got many miracles. This is the humble beginning of Kurisumudy Pilgrimage.