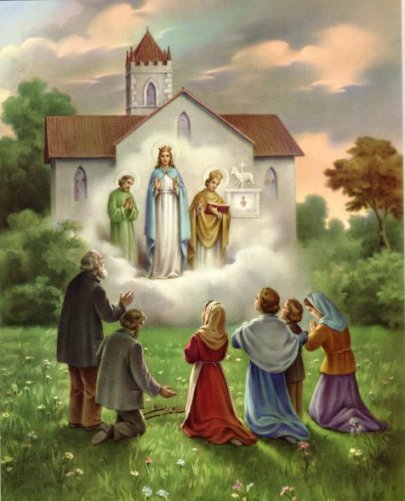 Our Lady of Knock
The appearance at Cnoc Mhuire (Knock)
in Ireland, August 21, 1879

County Mayo was in the center of a region of Ireland that had suffered great distress in the 1870's. Various famines and economic dislocations produced by forced evictions had created yet another wave of Irish immigration. It was into this environment that the Lord again sent His Mother to visit with His oppressed children.
The Apparition at Knock took place on 21st August, 1879, eight years after Pontmain in 1871. The two apparitions are broadly similar, in that they both took place in the evening and only lasted for three hours or so, and similarly, in both, no words were spoken.

On the evening of Thursday, 21 August 1879, two women from the small village of Knock, Mary McLoughlin and Mary Beirne, were walking back to their home in the rain when they passed by the back of the town church. There against the wall of the church stood the Blessed Virgin Mary, St. Joseph, St. John the Evangelist, and an altar with a lamb and a cross on it. Flying around the altar were several angels. The women called several other people to the church. They too saw the apparition. What they and thirteen others saw in the still-bright day was a beautiful woman, clothed in white garments, wearing a large brilliant crown. Her hands were raised as if in prayer. This woman was understood by all who saw her tobe the Blessed Virgin Mary, the Mother of Jesus and the Queen of the Angels. Other villagers, who were not involved with the apparition, nonetheless reported seeing a very bright light illuminating the area around where the church was located. There were subsequent reports of inexplicable healings associated with visits to the church at Knock.

The Church response to this series of events was typically circumspect. A commission was formed to gather testimonies of those claiming to see the apparition and then a record of purported cures and devotional material was maintained until 1936. At that time, the head of the diocese of Tuam, Archbishop Gilmartin, authorized the publication of a pamphlet supporting devotion to the apparition at Knock. However, over time Knock gradually gained official support from the Church, culminating in the Papal visit of 1979. The symbolism of the lamb, cross and altar has been seen as pointing to the sacrificial death of Christ and the Mass, and yet these were behind Mary in the apparition at Knock, suggesting that the focus was on her and her role as a mediator. Knock was different from other approved apparitions in many ways. The first difference is the number of figures in the apparition. Usually, only Mary appears. The second difference is the lack of a verbal message. In all of the other apparitions, Mary appears with a request or a warning. Another difference is the large number of people that saw the apparition. Apparitions are typically seen by no more than five people. Finally, the apparition was very brief. It only occurred once, for a two hour duration. Apparitions are usually made up of multiple visitations. These differences have led some to doubt that the events at Knock ever took place. 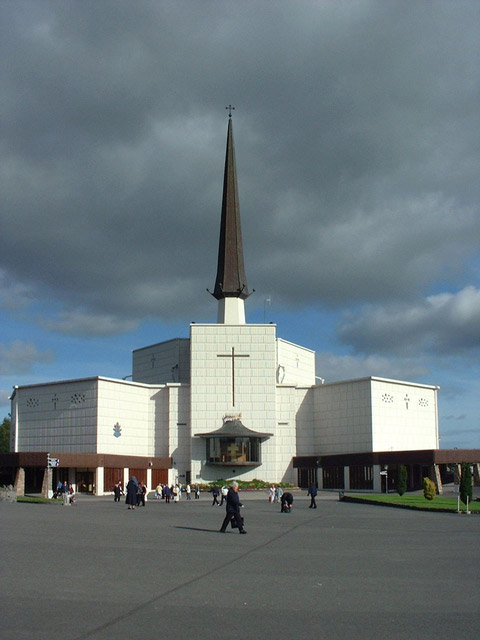 As the news spread, pilgrims by the thousands arrived here with their sick. A large number of unusual cures were reported. Those who claimed a cure left their crutches and canes at the site, and many of those supports were attached to the wall. Pilgrims snatched plaster and bits of cement off the apparition wall for relics in 1879 and the 1880s. In the fall of 1880, a statue of Our Lady of Knock was erected where she had been seen during the vision. This place in Ireland had become a place for pilgrimage: one-and-a-half million visitors trek there annually.

This blessing upon Ireland apparently was expected because of the constant devotion to Mary that had always been exhibited on that island. St. Joseph was revered. St. John the Evangelist and the Irish people both knew love: Knock is a sign of that love. The Irish people have always understood that there is nothing divine about Our Lady; she is not God. The Blessed Virgin Mary is a human being, a sister to humankind, as well as mother. However, she is the mother of Jesus the Christ, who is divine as well as human. Therefore, Mary is the mother of God. She has no power of her own, but she is, and always will be, the mother of the most powerful person who ever walked the earth. The Blessed Virgin Mary has been assumed into heaven now to be with her Son. Sometimes she comes to earth as a heavenly messenger, sent by her Son, and she then appears to people. When the Virgin Mary speaks, she brings no new messages, nothing that is not contained in the biblical teachings of Jesus. The Virgin Mary represents Him to us, and she calls upon us to have sorrow for sin, to repent and turn to God.

The Church officially investigated the apparition at Knock in 1879, and again in 1936. It was found that the witnesses were believable and that there was nothing contrary to the faith. Four recent popes have honored Knock. Pius XII blessed the Banner of Knock at St. Peter's and decorated it with a special medal on All Saints' Day, 1945. It was the Marian year. On this occasion, the Pope announced the new feast of the Queenship of Mary. Pope John XXIII presented a special candle to Knock on Candlemas Day in 1960. He had always regarded it as one of outstanding shrines devoted to Our Lady. Pope Paul VI blessed the foundation stone for the Basilica of Our Lady, Queen of Ireland, on June 6, 1974. Pope John Paul II made a personel pilgrimage to the Shrine to the shrine on Sept. 30, 1979. He addressed the sick and the nursing staff, celebrated Mass, established the shrine church as a basilica, presented a candle and the golden rose to the shrine, and finally knelt in prayer at the apparition wall.

Ten days after the first apparition, the first cure occurred. A young girl, born deaf, was instantly given the gift of hearing. At the end of 1880, some 300 cures, apparently miraculous, had been recorded in the diary of the parish priest. One of the pilgrims, who had been cured soon after the apparition, testified many years later that he had seen "as many as half-a-dozen pilgrims simultaneously undergoing their cure, or getting relief, and in vision I see the lame walk, my case included, the sightless seeing, the withered skins expanding." May Mary, Mother of the Lord, woman of the Magnificat, who identified herself with the anawim of this world, obtain for us courage to challenge the mighty and to put ourselves at the service of her Son and His kingdom of justice, peace and love. May we always pray:

Prayer to Our Lady of Knock 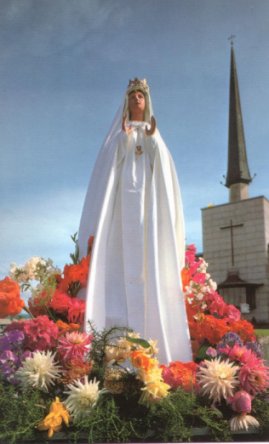 Our Lady of Knock, Queen of Ireland, you gave hope to our people in a time of distress and comforted them in sorrow.
You have inspired countless pilgrims to pray with confidence to your divine Son, remembering His promise: "Ask and you shall receive, Seek and you shall find".
Help me to remember that we are all pilgrims on the road to heaven.
Fill me with love and concern for my brothers and sisters in Christ, especially those who live with me.
Comfort me when I am sick or lonely or depressed.
Teach me how to take part ever more reverently in the holy Mass.
Pray for me now, and at the hour of my death.
Amen.