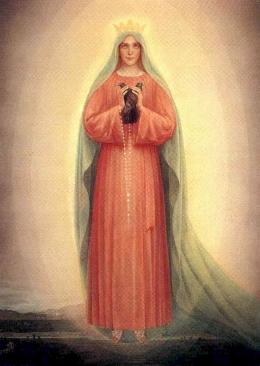 Queen of the Family

The Parish of Ghiaie di Bonate is situated in the Bergamo Diocese at about ten kilometres from the chief town. The Second World War was tearing Italy apart and leaving behind death and destruction. It was in this time that Our Lady, Mother of Unity and Queen of Peace, chose a girl from Bonate, Adelaide Roncalli, to launch her messages to the world. Late in the afternoon of the 13th May 1944, Our Lady appeared to Adelaide Roncalli. Adelaide was seven then. She was born on the 23rd April 1937 at 11 at Torchio and was baptized on the 25th April. Like she had done at Fatima on the 13th May 1917 during the First World War, Our Lady chose the 13th of May for sending the world, torn apart by the Second World War, her messages of hope and peace again. The apparitions of Ghiaie di Bonate were called "Fatima's epilogue".

She appeared to her for thirteen days in two cycles: the former from the 13th to the 21st May, the latter from the 28th to the 31st May.
Our Lady foretold her: "You shall suffer a lot, but do not cry, because then you will come with me into Paradise. In this valley of deep sorrows you will be a little martyr …". But Adelaide was too young to grasp the gravity of those words immediately. After the apparitions, she was isolated, intimidated, frightened and psychologically tortured, insomuch that somebody, on the 15th September 1945, managed to wrench a retractation in writing which will weigh a ton on the case for the acknowledgment of the apparitions. On the 12th of July 1946, she withdrew the retractation that had been imposed on her, restating in writing the truthfulness of the apparitions, but unfortunately that did not bring about the wished-for effect, as on the 30th April 1948 Bergamo's bishop mons. Bernareggi issued a 'non constat' decree, prohibiting every form of devotion to Our Lady, worshipped as appeared at Ghiaie di Bonate.

“When she had her fifteenth birthday, she was allowed by the bishop to go into the convent of the Sisters Sacramentine in Bergamo. After the bishop's death, somebody managed to draw out the order of driving her out of the convent, making her give up the vocational plan that Mary had expressed about her. This renunciation brought about much suffering and cost her a long disease.
Any teenager would have been destroyed by such a vicissitude like hers, but Adelaide was strong and she recovered. Tired of waiting for the gate of the convent to open, she made up her mind to get married and went to live to Milan, where she devoted herself to the care for the sick. The years passed and Adelaide shut herself up in silence as commanded by her superiors.
Finally, availing herself of the decrees of the Council Vatican II as regards one's right to information, Adelaide felt disburdened of the prohibitions that had been imposed on her and decided to restate the truthfulness of the apparition in front of a notary public, solemnly and officially. 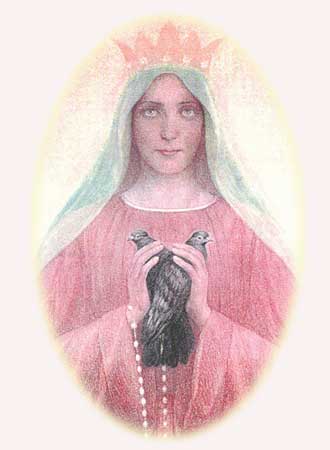 On the 20th February 1989 she stated the following:

"I the undersigned Roncalli Adelaide, born at Ghiaie di Bonate Sopra (Bg) on the 23rd April 1937, on occasion of the forty-fifth anniversary declare hereby again as repeatedly stated on previous occasions, that I am absolutely persuaded of having had the Apparitions of Our Lady at Ghiaie di Bonate from the 13th to the 31st of May 1944 when I was seven of age. I offer to God and to the rightful Authority of the Church, which is solely entitled to acknowledge or not what with clear conscience and in full possession of my mental faculties I deem to be the plain truth, the vicissitudes sorrowfully experienced by me since then on.
In witness thereof …
Adelaide Roncalli, 20th February 1989”

10th APPARITION
Date: Sunday 28th May
Time: 18:00
Attendance: About 300.000 people
Vision: The Blessed Virgin Mary with two Saints on either side 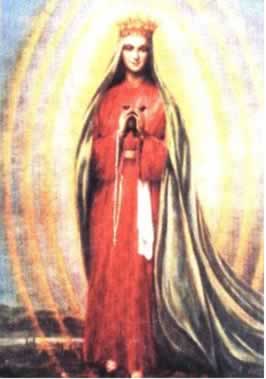 Like at Fatima, celestial phenomena took place at Ghiaie too, such as had never been seen before.
Doctor Eliana Maggi testified with a deposition under oath on the 16th January 1946 before the Episcopal Committee:" That Saturday was a rainy day. At the outset of the apparition a sunray shone on the child's head. I raised my eyes to the sky and saw a cross-shaped rift in the sky and a shower of golden and silvery spots, for a minute or two, and everybody hailed it as a miracle". Don Luigi Cortesi wrote in connection with the solar phenomena of that Saturday evening:"Somebody noticed a strange beam of light, shining upon the child and reverberating over the surrounding faces. Others noticed the sun had a cross shape; others saw the solar disc whirl dizzily forming a ring not larger than half metre. In the lower layers of the atmosphere some people saw a rain of gold stars, small yellow clouds in the shape of hoops, so thick and near that somebody tried to catch them in full flight. On the onlookers' hands and faces the most various colours shaded off, with the yellow colour prevailing over the others; phosphorescent hands were seen,

That evening impressive solar phenomena took place at Ghiaie di Bonate and in Lombardy.
Many were the testimonies of the people who were on the spot or in the neighbouring villages. Towards six hours, the sun came out of the clouds, whirled dizzily on itself projecting beams of yellow, green, red, blue, violet light in all directions; the beams of light coloured the clouds, the fields, the trees and the stream of people. After a few minutes the sun stopped its whirl and those phenomena began soon again. Many noticed that the disc had turned white like a Host; the clouds seemed to be lowering down on the people. Some noticed a Rosary in the sky, some others a majestic Lady with a trail cloak. Some other people, further off, saw Our Lady's face looming in the sun. From Bergamo many witnesses observed the sun become pale and radiate all the rainbow colours, shed in all directions; they also noticed a large yellow light beam falling over the Ghiaie perpendicularly.

The solar phenomenon repeated itself; it will be seen not only at Ghiaie but also in very distant places.

From the parish journal of Tavernola, dated June 1944, one can read: "At 18 hours sharp, people noticed a fading of the solar light together with a flash, similar to a sudden lightning; the phenomenon was first distinctively observed by some bowlers. The sun looked green, then bright red, then gold yellow… furthermore, it whirled dizzily. On seeing that spectacle, people poured into the streets …"

The solar phenomenon was observed also on the 31st May, both at Ghiaie and in other places. Many recoveries took place on that day. The solar phenomenon repeated itself also on 13th june and 13th july 1944. At Fatima we had only a celestial phenomena seen by 70.000 persons. At Ghiaie we had 6 celestial phenomenas seen by more than a million of persons. During the period of the apparitions and immediately after, there were about 300 complete recoveries 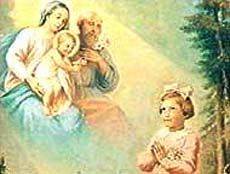 On the 8th July 1960, Pope John XXIII sent a letter to monsignor Joseph Battaglia bishop of Faenza "with regard to the Ghiaie question".
"Confidential 8-VII-1960 Dear Excellency, let us always be united in thought, heart, prayer. As to the Ghiaie affair you will certainly appreciate that one must start from the top, not from the plane: and not involve who must have not the first but the last word. More than substance, here we must allow for the circumstances that need to be studied and valued above all things. What is valid in "subiecta materia" is the seer's witness: and the authenticity of what she still maintains at 21 years of age and in conformity with her first statement at 7 years of age: and withdrawn on account of the threats and fears of hell exerted by somebody. It seems to me that the terror for those threats still persists. . However Your Excellency understands that it is neither practical nor useful that the first move for reassessment be made by the undersigned who is entitled to the "verbum" for the Congregation of Liturgy or other ministry, who in due time "faciat verbum cum S.S." ecc. Excuse the plainness of my words. And always look after yourself "in laetitia et in benedictione" even if "dies mali sunt.Yours affectionately John. XXIII".

Father Pius is reported to have said to some people from Bonate who were on a visit to Petralcina: "What are you doing down here, you who have Our Lady of Bonate in your village?"

The missionary father Candido Maffeis (that young boy who, in the course of the 2nd apparition, had Adelaide ask Our Lady whether he would become a priest) said during an interview twenty years ago: "These last forty years, instead of exhausting the people's faith in Our Lady as appeared at Ghiaie, have shown a thread, let's call it underground or celestial if you want, that has kept alive the confidence that Mary will get things straight herself, because men have blundered and confounded people, ideas, messages and personal passions, both ideological and scientific, using a too human and sectarian standard, and have stifled and blurred the luminous historic event of Ghiaie…".

Today father Candido's words are more relevant than ever.
It is true, the flame has not died out, it is stronger than before instead, and the "beautiful and majestic Lady" weaves her cloth and attracts people to Ghiaie di Bonate.
You just need to go to the chapel of apparitions of 1944, both by day and night, to see the incessant stream of worshippers and pilgrims, among whom many young people looking for comfort.

It is no use expressing judgements. Our lady's words addressed to Adelaide in the last apparition will suffice: "Endure everything patiently and then you will reach me in Paradise. Those who make you suffer intentionally will not come to Heaven if they do not make amends for their wrongs and do not repent deeply."

Help us with your prayers so that Our Lady of the Ghiaie, Queen of the Family, may triumph at last.

Through the messages of Ghiaie di Bonate, Our Lady still teaches that there cannot be a holy family without living trustfully in Our Lady's motherly hands.
For these messages, please see: www.madonnadelleghiaie.it/insegnamenti

Till 1944, millions of persons, in 60 years, have gone to Bonate to the little Chapel. On 2002, 250.000 persons come to Bonate. Decret "non constat" is not negative. It means that there are not enough proofs. There is asking for a revision of the decret.

The information on this homepage of the apparitions of Ghiaie di Bonate have been taken from the official site with permission of the webmaster Alberto Lombardoni; email: info@madonnadelleghiaie.it Look at www.madonnadelleghiaie.it, where there are the complete story and the messages.