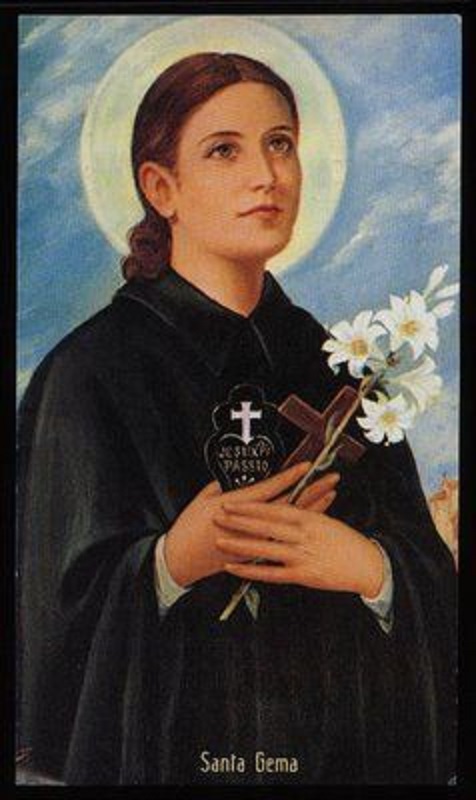 The Lily of Lucca - The Virgin of Lucca

Saint Gemma Galgani, also known as the Flower of Lucca, was an Italian mystic often referred to as the "Daughter of Passion," for her intense replication of the Passion of Christ. She was born on March 12, 1878, in a small Italian town near Lucca. Gemma is the Italianword for gem.

Inspired by her mother’s teachings, Gemma developed a love for Jesus and a strong devotion to prayer at a very young age. Little Gemma lost her mother when she was only eight years old. It was after this tragic event that Gemma’s father sent her to a Catholic boarding school run by the Sisters of Saint Zita, which she described as “paradise.”

Gemma made her First Communion on June17, 1887. Later, she wrote, “It is impossible for me to describe whatpassed between Jesus and myself in that moment. He made himself felt sostrongly in my soul. I realized in that moment how the delights of Heavenare not like those of the earth, and I was seized by a desire to make thatunion with my God everlasting.”

Her health was always poor, and between that and her home life she never finished school. Cured in her 20’s of spinal meningitis by prayers to the Sacred Heart of Jesus, Saint Gabriel of Our Lady of Sorrows, and Saint Marguerite Marie Alacoque. Rejected by the religious orders to which she applied as they were concerned about her health, would not believe her cure, and were suspicious of the claims of a miracle.

Saint Gemma was one of the recipients of the Holy Wounds of Christ. She tells what took place when she received the Holy Stigmata on June 8 in the year 1899, a Thursday, on the eve of the feast of the Sacred Heart. The Saint discloses:

Saint Gemma then experienced a rapture in which she saw her guardian angel in the company of the Blessed Virgin Mary. Saint Gemma tells what took place next:

In early 1903, Gemma was diagnosed with tuberculosis, and thus began a long and often painful death. There were numerous extraordinary mystical phenomena that occurred during her final illness. One of the religious nursing sisters who attended to her stated, "We have cared for a good many sick people, but we have never seen anything like this." At the beginning of Holy Week 1903, her health quickly deteriorated, and by Good Friday she was suffering tremendously. Gemma died in a small room across from the Giannini house on April 11, 1903—Holy Saturday. After a thorough examination of her life by the Church, she was beatified on May 14, 1933 and canonized on May 2, 1940. Galgani's relics are housed at the Passionist monastery in Lucca, Italy.

She was beatified within 30 years from the date of her death which included the mandatory five years waiting period before the process of canonization starts. Very few in the Catholic Church have had sainthood conferred on them this quickly.

As one of the most popular saints of the Passionist Order, the devotion to Gemma Galgani is particularly strong both in Italy and Latin America. She is a patron saint of students (said to be the top of her class before having to leave school) and of pharmacists.

Prayer to Gemma Galgani to heal back pain 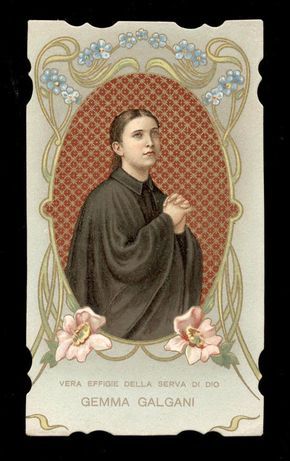 Saint Gemma, you are honored as the patron of those who suffer from back pains and spinal issues. Pray for me so that I may be relieved from my back pain How compassionate is your love for those in distress. Saint Gemma, have pity on all who labor under the cross and are in need of God's mercy. You suffered from back ailments all your life until you were cured by your strong devotion to the Sacred Heart of Jesus. I now call upon your heavenly assistance and ask you to intercede on my behalf before the Most Sacred Heart of Jesus. The numerous miracles and the wonderful favors attributed to your intercession instill in me the confidence that you can help me. Pray for me so that I may be cured of my back pains and back issues, so that I may be able to enjoy pain free all the beauty that life has to offer in God's Beautiful World. Thank you, Saint Gemma. Pray for me, Saint Gemma, that I may be made worthy of the promises of Christ. Amen .