Boniface, known as the apostle of the Germans, was an English Benedictine monk who gave up being elected abbot to devote his life to the conversion of the Germanic tribes. Two characteristics stand out: his Christian orthodoxy and his fidelity to the pope of Rome.

Instead of remaining in England, Wynfrid decided to became a missionary. In 716, he traveled to Frisia (now part of the Netherlands), following in the footsteps of other Anglo-Saxon missionaries. However, he found the local ruler unwelcoming and soon left the area.

After his return to England, Wynfrid was chosen to be the abbot of his monastery. Still wishing to evangelize, he turned down the position and proceeded to Rome in 718. There, he met with Pope Gregory II, who gave him the name Boniface.On May 15, 719, the pope sanctioned Boniface’s desire to spread the gospel. Boniface once again visited Frisia, where the political climate had changed. This allowed him to gain valuable experience as a missionary, which he then put to use in Hesse.

Over the years he kept up an extensive correspondence, asking directives of the popes, giving information about the many Christian communities, and relaying to the people the popes' wishes. In 752, as the pope's emissary, he crowned Pepin king of the Franks. In his 80s and still filled with his characteristic zeal, Boniface went back to preach the gospel in Frisia. There, in 754 near the town of Dokkum, Boniface and several dozen companions were waylaid by a group of savage locals and put to death. His remains were later taken to Fulda, where he was revered as a martyr to the Christian faith.

Boniface was a man of action, but he was also sensitive to the feelings of those with whom he came in contact. His organizing genius and loyalty to Rome influenced Germany's Christianity for centuries 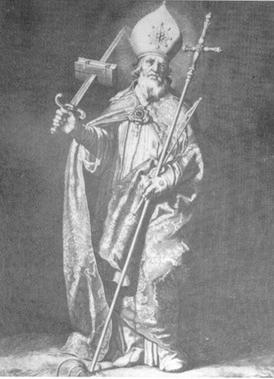