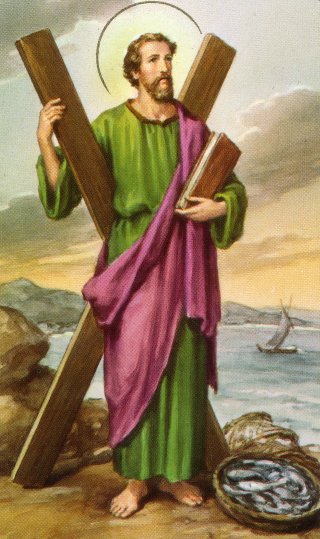 The First-Called
(brother of Simon Peter)

Saint Andrew, the Apostle, son of Jonah, or John and brother of Simon Peter, was born in Bethsaida of Galilee. He became a disciple of the great Saint John the Baptist, but when John pointed to Jesus and said: "Behold the Lamb of God, Which taketh away the sin of the world", Andrew understood that Jesus was greater. He straightway followed Christ, and became His first disciple; wherefore he is called the First-called (Protokletos) of the Apostles.

Having met Jesus, Andrew then finds his brother Simon and brings him to Jesus. In the gospels Andrew is referred to as being present on some important occasions as one of the disciples more closely attached to Jesus. Andrew was a fisherman, like his father and hid brother Simon Peter. It's no wonder then that Jesus called Andrew to be a fisher of men. Before Jesus feeds the Five Thousand, it is Andrew who says: "Here is a lad with five barley loaves and two fish".

Andrew exulted in his mission to preach in Asia Minor, part of Greece, and an area along the coast of the Black Sea, including its gateway, the city now known as Istanbul, or Constantinople. He came to Jerusalem for the First Synod of the Apostles, about 50 AD.

Saint Andrew was martyred in Peloponnese, in the city of Patras. The Proconsul Aegeates' family believed in the miracles and preaching of Saint Andrew, and the enraged Proconsul tortured and crucified Saint Andrew on a saltire (x-shaped) cross (Crux decussata) and commonly known as "Saint Andrew's cross". A "X," the first letter of "Christ" in Greek. The new converts wanted to remove him from his cross, but the saint would not allow them. Finally, the Apostle prayed to God and a strange radiance surrounded him. This light lasted for half an hour and, when it disappeared, the Apostle gave his holy soul into God's hands. It was the year 62 AD.

Legend has it that relics of Saint Andrew were in the care of a monk of Patras, named Saint Rule, also know as St. Regulus. One night in a dream an angel appeared to him and told him to take the relics to Scotland. He did as he was instructed and Saint Rule have come ashore at a Pictish settlement on the East Coast of Scotland and this later became Saint Andrews. Thus the association of Saint Andrew with Scotland was said to have begun. He built a church there to house the holy bones. In later years the Scots came to look on Andrew as their own special saint. They believed he helped them in battle and they looked on his flag – a white X-shaped cross on a blue background – as Scotland’s own. Every year on 30th November the Scots celebrate St Andrew’s Day.

Prayer to Saint Andrew the Apostle 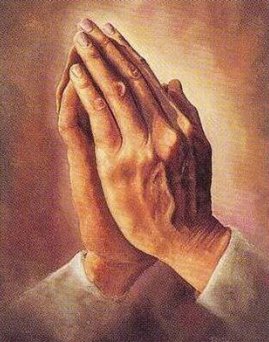 O Glorious Saint Andrew, you were the first to recognize and follow the Lamb of God. With your friend Saint John you remained with Jesus for that first day, for your entire life, and now throughout eternity.

As you led your brother Saint Peter to Christ and many others after him, draw us also to him. Teach us to lead others to Christ solely out of love for him and dedication in his service. Help us to learn the lesson of the Cross and to carry our daily crosses without complaint so that they may carry us to Jesus.
Amen.