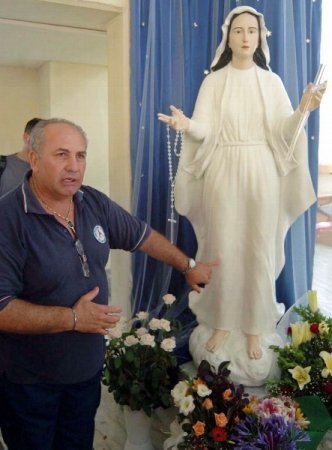 One group of pilgrims claim to have filmed a miraculous “walking statue” of the Madonna with their video phones on Sunday, July 24, 2005 in the Church of San Pietro in the town of Acerra near Naples, Italy. According to witnesses, the statue’s legs have moved repeatedly over the last few days. The hands and feet of the Madonna had begun to “take human form, flesh and blood”. They will show the footage to the Bishop of Acerra, Monsignor Giovanni Rinaldi, who will decide whether the celluloid "proof", together with photographs purportedly taken with mobile telephones, warrant examination by a special church commission that investigates reports of apparitions.

Parishioners said that the movement had first been noticed by cleaners, who had kept silent for fear of being disbelieved. They claim not to have been the victims of mass hysteria. Many drew an analogy with the “weeping Madonna of Civitavecchia”, a statue brought from a shrine at Medjugorge in Bosnia-Herzegovina, which ten years ago was said to have cried blood. The Civitavecchia “miracle” has never been recognised by the Vatican but the town — a port on the coast near Rome — has benefited from the phenomenon, with the local authorities building a reception centre for pilgrims.

The 160cm (63inch) high statue, made of plaster and marble dust, was installed at the church last December. Father Oreste Santoro, the parish priest, said that he had not seen the statue move. Thousands of Italians have flocked to the Church of San Pietro.

Mgr. Antonio Riboldi, the retired bishop of Acerra, also urged caution, saying that “these matters are often difficult to comprehend. The Church proceeds with great prudence where apparitions of the Virgin Mary are concerned”. The Vatican has approved 15 “authentic apparitions” by the Virgin Mary since 1830, but only one “weeping Madonna”, a statue at Siracusa in Sicily that wept “tears of blood” in 1954.