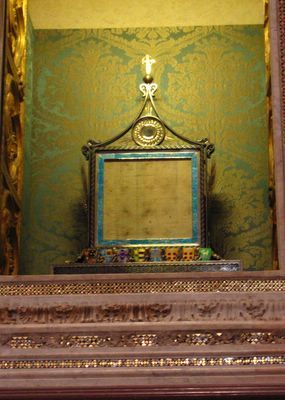 In the year 1263 a priest, whose name was Fr. Peter, arrived at the sanctuary Bolsena coming from the city of Prague (today capital of the Czech Republic). Tradition also reports that Peter had set out for such a long and difficult pilgrimage to strengthen his own vacillating faith, especially concerning the real presence of Christ in Eucharist.

He was celebrating Mass in the Basilica of Bolsena, and when the moment of consecration arrived, the Host was transformed into Flesh. This miracle strengthened the wavering belief of the priest in the Real Presence of Christ in the Eucharist.

After a thorough fact-finding investigation the Pope ordered that the miraculous host and the linen altar cloth (Corporal) stained with blood be brought to Orvieto and placed on display. It is still on display today for pilgrims to see, although there is an admission charge for the Cathedral as far as we know.